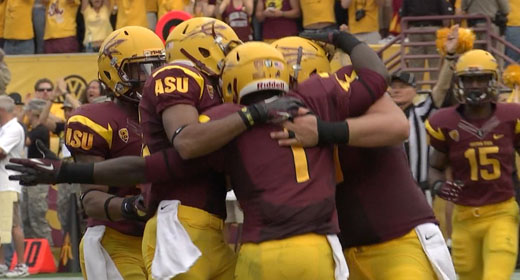 The 5-1 start is irrelevant, the four game losing streak is irrelevant, being bowl eligible is irrelevant…for now. When it comes to the Territorial Cup matchup, the past is in the past and has nothing to do with what can expect to be seen in the latest chapter of the Arizona State and Arizona rivalry.

“You can be 11-0 but if you don’t win this game, you have an unsuccessful season,” said ASU head coach Todd Graham in his press conference on Monday. “This is what college football is all about are rivalry games and none that has more passion than this one.”

For the sixth time this season, the Sun Devils hit the road for a game and are currently 2-3 on the season in games away from Sun Devil Stadium. Despite having a below .500 road record, being on the road for the territorial cup could actually be an advantage for the Sun Devils.

The last three seasons, the road team has won the territorial cup game. If history continues to repeat itself, that would be a good thing for the Sun Devil faithful. That’s something that senior linebacker Brandon Magee is very aware of and is excited about.

“I like playing them better over there than over here honestly because the looks on their faces in 2010, priceless,” said Magee after the win over Washington State last Saturday. “When they came over here last year dancing all up on our A and stuff like that, I don’t forget that either.”

“You’re not going to remember what some person said to you hanging over the rail,” mentioned Graham. “You’re going to remember who won the game. And that’s one of the things that’s always a challenge about going on the road, especially in a rivalry game.”

As for the game itself, a Sun Devil team that pride’s itself on defense has their eyes on Arizona running back Ka’Deem Carey. The Sun Devils allowed only one yard on 19 carries against Washington State but acknowledge that they will have their hands a little bit more full with the conference’s leading rusher.

“I think he is the best running back that we’ve played,” Graham explained. “We’ve played some pretty good backs. Johnathan Franklin is an unbelievable back and there’s great backs in this league but if you just look at the amount of carries he’s had and what he does, he’s as good as there is.”

A side story will be between two fifth year senior captains for both teams who are very familiar with one another. Brandon Magee and Arizona quarterback Matt Scott both graduated from Centennial High School in Corona, California in 2008 and grew up friends. But this weekend their friendship goes out the window.

“Completely out the window,” Magee stated. “I’m not going to say hi to the man. I’ll pick him up off the floor.”

Sounds about right for the Territorial Cup.

Sun Devils and Wildcats kick-off at 8:00 p.m. on Friday from Arizona Stadium in Tucson.

The motto is players coaching players as ASU camp begins