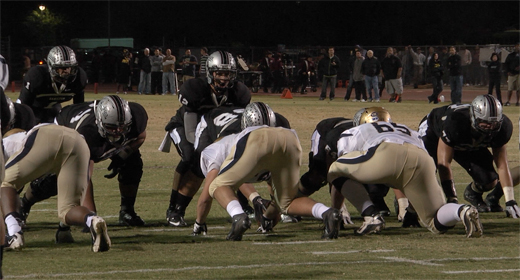 Three Desert Vista turnovers in the second half proved to be costly as Hamilton rolls over the defending state champions 28 – 14.

The Hamilton defense forced a fumble on Desert Vista’s second half opening drive which led to a 13-yard touchdown run by Elijah Williams.

Hamilton dominated the game early, jumping out to a 14 – 0 lead. Their first score coming off a blocked punt that resulted in a touchdown by Luke Parrish in the first quarter.

Late first-half, Hamilton looked to extend their lead but could not convert on 4th down in the redzone. The ensuing drive, Desert Vista marched down the field and scored on a 39-yd pass from Matt Young to Kaleb Germinaro. That cut the lead to 14 – 7 going into the half.

However the Thunder quickly lost their offensive momentum with the disastrous start to the second-half.