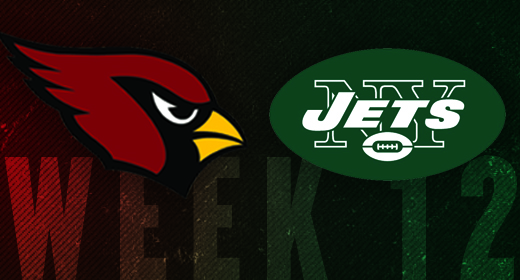 The New York Jets, like the Cardinals, are in the midst of a disappointing season. Both teams are 4-7, and will square off this Sunday morning at MetLife Stadium in East Rutherford, N.J.Ryan’s Jets have lost four of their last five games, including a 49-19 Thanksgiving night massacre at the hands of the New England Patriots.

Despite the way the season has gone, Ryan says he’s doing okay.

“Oh please, I’m fine,” Ryan said. “The season’s been a little rough there’s no question about that, but we have five games left and we’re excited about the opportunity that’s in front of us. It hasn’t gone great, but please, we’re still kicking.”

Fireman Ed was perhaps THE most visible and vocal Jets fan at Giants Stadium/MetLife Stadium before he decided to hang it up after the Patriots game.

Ryan said he appreciated all Fireman Ed did for the organization in his fan capacity.

“I really admired him,” Ryan said. “He was great, and it’s unfortunate that he felt he needed to do this.”

Ryan said it won’t be hard to find another fan like Fireman Ed, if they just start playing better.

“I think if we play the way we’re capable of playing, there will still be that ‘J-E-T-S’ chant out there anyway,” Ryan said.

For those that didn’t know, Ryan has ties with the Cardinals organization.

In 1994, Buddy Ryan, Rex’s father, was hired as the head coach of the Cardinals. Ryan offered his son his first job in the NFL as a defensive assistant, working with the linebackers and defensive linemen.

Ryan spent two years with the Cardinals before being fired, along with the entire coaching staff after a 4-12 season.

Ryan vividly remembers his time with his father in Arizona.

“Best thing that ever happened to me in my profession and learning the game,” Ryan said. “I think from my perspective, I’m only about 100-thousand times better coach than I was then.”

Ryan said his father was “50 years ahead of his time” as a coach, which really helped him learn how to be a better coach.

“Sometimes learning from my dad as a head coach, you learn what to do and what not to do,” Ryan said.

Neither the Jets nor the Cardinals are playing their best football right now, which makes Sunday’s game all the more important for both organizations.

“Obviously for both teams, you’re just fighting like crazy,” Ryan said. “Both of us are an extremely hungry football team, [and] we both feel we’re better teams than what our record indicates.”

Ryan couldn’t get past the Cardinals defense, whom he calls “one of the best defenses in the National Football League.”

Five turnovers. That’s how many the Jets had against the Patriots last Thursday night.

Ryan knows they can’t afford to duplicate that against a very opportunistic Cardinals defense.

“You turnover five times, you’re not gonna beat anybody, and that’s what happened to us this past week,” Ryan said. “Against Arizona, that’s got to be our No. 1 priority, to take care of the football first, and that’s certainly going to be a challenge this week.”