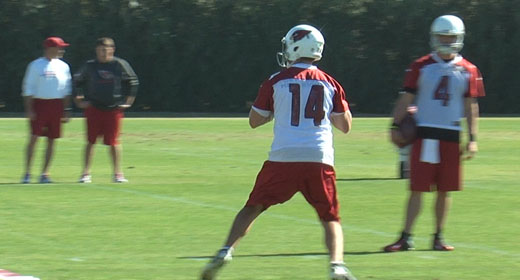 The merry-go-round at quarterback for the Cardinals just doesn’t stop. The leader of Sunday’s ride against the Rams will be rookie Ryan Lindley.

Lindley took first-team snaps at practice on Wednesday, essentially making head coach Ken Whisenhunt’s decision quite clear to all that saw it.

“Well it won’t hurt, that’s for sure,” Whisenhunt said in regards to the decision to start Lindley.

“He’s done a good job in what we’ve asked him to do even with limited reps, so we’ll get an opportunity to get him better prepared and see how it plays out in the game,” he said.

Lindley replaced John Skelton after the first quarter in Atlanta this past Sunday, after Skelton was an ineffective 2-of-7 passing for six yards.

Lindley’s numbers on the day weren’t that much better than Skelton’s. Lindley was 9-of-20 for 64 yards.

Despite the lack of output on Lindley’s part, Whisenhunt liked how Lindley handled himself after being thrust into a tough situation.

“Well he did a nice job in a hostile environment handling the game, without a lot of practice during the week,” Whisenhunt said. “So where we are as a team and as an offense, give this a chance to see what he can do. See if he can get, with a week of practice, if he can get in there and get us going and help us move the ball and score some points.”

Lindley is taking this all in stride. It has to be hard on him knowing that he’s taking the starter’s role from Skelton, who was originally tapped as the team’s starting quarterback at the beginning of the season.

On the other hand, this is part of Whisenhunt’s plan to field the best players he can at every position, and Lindley is more than up to the task.

“I’m just thankful for the opportunity,” Lindley said. “It’s a blessing and I’m going to put 110 percent into it and make sure I’m ready to go by Sunday.”

Making your first start at home has to be a comforting feeling for Lindley. For him, there’s a lot less around him to steer him off course.

“Without a doubt,” Lindley said. “I think there are a lot of things with how you can control things and with the line of scrimmage, using the play clock more to your advantage. There’s a lot of stuff that when you’re at home, instead of the silent snap count, but have your own cadence to get everything going. So it will be an advantage for us.”

Lindley says he’s getting more and more comfortable with offensive coordinator Mike Miller and quarterbacks coach John McNulty and how they want things to run.

Lindley said he’s still a ways away from mastering the offense, but he’s happy with where he is in his progression.

From what I’ve seen from Skelton on the practice fields and in the locker room, he’s a man who’s handling himself and this situation about as well as any human being could.

It helps that he’s been through similar situations like this in the past with Kevin Kolb, and them flipping back-and-forth between starter and second string.

At the end of the day, it still hurts Skelton to be relegated to a backup role.

“Yea, disappointing, frustrating, but [it’s] part of the game,” Skelton said. “There’s gonna be ups and downs in your career, so [I’ll] move forward from this, I’ll help Ryan in any way that I can and hopefully we just get a win on Sunday.”