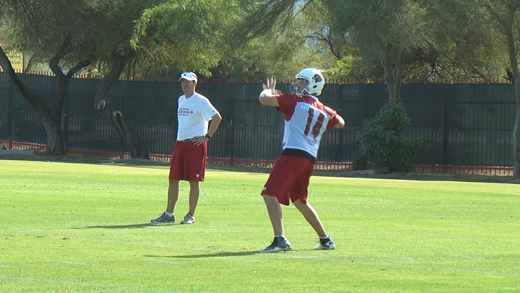 Cardinals quarterback Ryan Lindley got his first start of the season against the Rams this past Sunday, and other than the four interceptions he threw [two went for pick sixes], it really wasn’t a bad first outing.

Lindley will get a chance to redeem himself this coming Sunday at MetLife Stadium in East Rutherford, N.J., as the Cardinals (4-7) will take on another struggling team, the New York Jets (4-7).

Lindley says the team’s preparation this week won’t change much being that it’s a road game.

“You can’t really adjust your game-plan based on the road game, but it’s the same stuff I said last week,” Lindley said.

One thing that will be different for Lindley will be the man hiking him the ball.

Center Lyle Sendlein tore his MCL in the first quarter of the Rams game and played the rest of the game with the injury.

Sendlein was placed on season-ending IR on Tuesday. He’ll be replaced by Rich Ohrnberger, who Lindley has the utmost confidence in.

“Rich is a smart guy,” Lindley said. “I think if it were some younger guy, I think we might be worried a little more, but Rich has been around, he’s seen a lot of stuff.”

Lindley continued to take first-team reps on Wednesday, and continues to get comfortable with his teammates.

Hopefully, with the rhythm will come the elimination or cut down on interceptions.

No one feels worse than Lindley does about the picks, but he really put things in perspective when he decided to take a broader view of the situation.

“For me, I lean on my faith a lot, so I don’t know if I could get through something like that without the faith I have,” Lindley said.

Lindley said he visited one of the local children’s hospitals on Tuesday, and to see what others are dealing with in their lives made him realize that throwing bad passes “is kind of trivial.”

“It was bad, but to see what other people have going on, I could be in a lot worse shape than I am right now,” Lindley said.

A Rex Ryan led team is always about rough defense, and Lindley knows he and his offensive linemen are in for a test on Sunday.

“They [Jets] are going to see the same thing, young guy, try to rattle him,” Lindley said. “You have to always be ready for everything, especially in blitz packages. You want to go in over-prepared if anything.”

In order to counter the blitz packages the Jets are sure to bring, Lindley says he, Ohrnberger and guards Adam Snyder and Daryn Colledge will work in tandem to try and quell their rush.

“Having two guys like Adam and Daryn next to him, that you know are seasoned guys, it’s going to help him [Ohrnberger] a lot to adjust to things,” Lindley said.