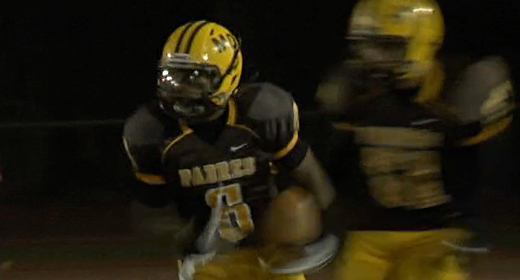 There was loads of talent on the field for the second round matchup between the seventh seeded and defending champion Chaparral Firebirds and the second seeded Marcos de Niza Padres.

Some of the state’s best were on display and those guys brought their best. Marcos de Niza would go on an offensive explosion in the first half which was enough to carry them for the rest of the game. The knocked off Chaparral 49-36.

These two teams met all the way back on week two of this season in a game where the Padres won on the final play of the game. Based on how this one started it seemed as if this one would end in a similar fashion.

Marcos rode the lightning fast legs of Maurice Lee right from the start. He scored the first touchdown of the game which was an 80 yard scamper for six. That was only the start of Lee’s night. The Arizona Wildcat commit finished with video game statistics, 339 yards on the ground and four touchdowns.

“He’s pretty exciting isn’t he?” said Marcos head coach Roy Lopez. “He’s special. He has got some explosive hips and he just goes through…the offensive line did an incredible job.”

“It was my offensive line man. I can’t thank them enough,” Maurice Lee explained. “I was able to get through every hole. I thank the offensive line. They did everything for me.”

Marcos was getting it done through the air as well. Josh Eckley connected with another Wildcat commit, Paul Elvira six times on the night for 148 yards. Two of those six connections were for touchdowns. Eckley totaled 10 of 15 for 191 yards and two touchdown passes. Plus 79 yards and a touchdown on the ground.

The Firbirds came out in the second half with renewed focus. They would crawl back into this game behind gutsy play from quarterback Brad Shenker who played most of the second half on a bad ankle. Receivers Jordin Hamilton and Tyler Wiley made plays left and right which brought Chaparral all the way back within 12 in the fourth.

That was as close as Chaparral would come as junior corner back Dominique Fernstermacher would get a pair of interceptions in the fourth. He had three total on the night. Schenker would throw six total in the game.

Marcos moves on to the semi-final’s for the first time in three years since making the state championship game. They take on to face the three seeded Ironowood Ridge Knighthawks next friday. A team Marcos lost to by eight back on week five.

“We just played with heart. All of us,” mentioned Lee. “We are very happy with this win. All of us were saying this was the game of our high school lives and ah man I am just so happy we beat them.”

After getting off tough 1-3 start, the Chaparral Firebirds went on a seven game win streak to get them into the playoffs. However, it is the first time in four years that the Firebirds will not be named state champions.