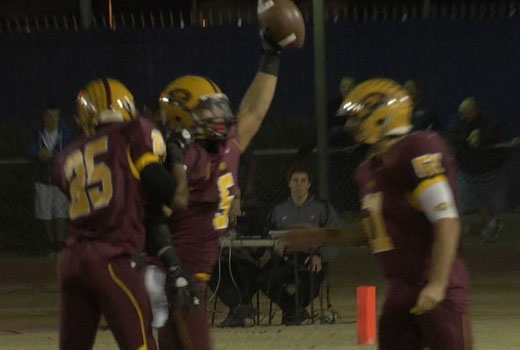 It was a heavyweight fight at McClintock High School on Friday night between the number four-seeded Brophy Broncos and the top-seeded Mountain Pointe Pride.

These two teams met earlier in the season, which was a game of two halves. Mountain Pointe jumped on top in the first half 21-10 but then Brophy erupted in the second half outscoring the Pride 44-7 in route to victory.

This game had a similar start, a Mountain Pointe halftime lead, but a different finish. It was the Pride that erupted in the second half this time knocking off the Broncos by the final score of 30-0, advancing to the title game eyeing the first state championship in school history.

“I thought we played really well as a team,” said Mountain Pointe head coach Norris Vaughn. “We were dominant on defense and I thought we would be.”

“We came into the game knowing we had faith and we knew we were going to beat them,” said Mountain Pointe junior receiver and defensive back Jalen Brown.

A game that saw 82 total points in the first meeting took a much different look this time as defense was they story. Especially early. It was a 7-0 halftime score and the Pride maintained that dominating defensive performance throughout to pitch the shutout and only allowing 134 total yards.

For the Pride on offense, they were finally able to get things going because of their running game. They had over 300 total yards on the ground for the game.

“The holes started opening up and then everyone started overflowing,” said Mountain Pointe running back Garette Craig.

Next up for the Pride, a state championship matchup with a team that is pretty used to being there, the Hamilton Huskies. The two faced off on week one of the regular season and came out on top 17-14.

“When we played Hamilton that was like a year ago it seems like,” said Vaughn. “But no we’ve got to play them again and I thought we might.”

“We’re excited to see them again,” mentioned Craig. “They’ve gotten better so we have to practice.”

As for the Brophy Broncos, their season ends sooner than they had hoped going into the season. The Broncos say goodbye to a remarkable senior class lead by Tyler Bruggman, Devon Allen, Charlie Renfree, Robert Relf and Andrew Curtis. A crew of players that took their licks as sophomore’s at the varsity level but grew up as a unit to bring Brophy back to one of the toughest and deepest teams in the state.

Mountain Pointe and Hamilton face off next Saturday at noon from University of Phoenix Stadium.