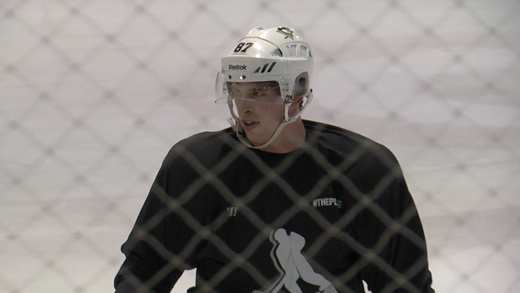 The puck still has not been dropped for the 2012-13 NHL season as the lockout, which officially began back in September, continues. At any moment, which players, owners and fans alike hope comes soon, the lockout could end. So the players need to stay disciplined by keeping in shape and being ready to go.

This week, some members of the Phoenix Coyotes as well as players from all around the league are going to convene at the Ice Den in Scottsdale for some organized scrimmages on Thursday and Friday.

One of the players making the trip out to the Valley is superstar center from the Pittsburgh Penguins, Sidney Crosby.

Crosby as well as San Jose Shark Patrick Marleau both worked out at the Ice Den on Wednesday working on technique and stamina before both participate in a game speed scrimmage the next two days.

“There are a big group of guys who are skating here (Phoenix),” mentioned Crosby. “I don’t know if the weather has anything to do with that…but it’s pretty easy for the word to get around. I think some guys just realized that there is a good group over here and thought it would be good to get some good skates.”

The frustration gets higher by the day for all in the league whether this the first NHL lockout they have been apart of or for some players, the second.

“To have this many lockouts in as much time that it’s been, you can easily understand their frustration,” Crosby explained. “It’s not good for anybody really. Ultimately that’s the bottom line. Nobody likes this.”

While Crosby is in the Valley to train, he plans to take advantage of other things the city brings this time of year. Great weather and golf.

“A lot of good golfers here but no, I am not that good,” he said.

Crosby and many other members of the NHL will be playing in the scrimmage on Thursday and Friday, which are open to the public at the Ice Den in Scottsdale. Scrimmages are planned to begin around 10 am.