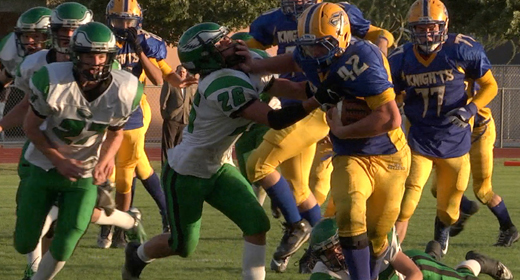 At halftime, Tempe Prep coach Thomas Brittain Tempe screamed at his team, “Four fumbles…four fumbles!” He repeated it over and over again as his team knelt around him on the sideline. It was four first half fumbles that prevented the Knights from sustaining any offensive momentum.

The halftime speech worked as Tempe Prep was able to secure the ball and the win over 6th-ranked Thatcher, 26-14.

“We had four fumbles in the first half which is very uncharacteristic,” Tempe Prep coach Thomas Brittain said. “We were dominant on the ground but killing ourselves with turnovers.”

The fourth Tempe Prep fumble in the first half proved to be costly. On the ensuing Thatcher possession senior quarterback Presley Motes hits Sam Bagnall for the Eagles first score of the day.

Thatcher kept the momentum going to start the second half. Motes led his team on a 73-yard drive which was capped off by an 11-yard touchdown pass to his tight end Garret Bryce. The Knight take the lead, 14 -13.

“When you let a team score on you finally, momentum means the world,” Brittain said. “So we had to fight to get confidence.”

That confidence came from a dominant running attack that ran for 265 yards and overpowered Thatcher’s defense. Tempe Prep’s work horse was senior captain Levi Hartzler, who ran for 146 yards on 25 carries .

With under 10 minutes to go in the game, the Knights marched 65 yards down the field and regained the lead on an 8-yard run by quarterback Anthony Brittain.

Hartzler added the exclamation point to the victory as he rumbled into the endzone from 16 yards out with less than a minute to go in the game.

The victory puts them in the semi-finals against 2nd-seeded Morenci next Saturday.