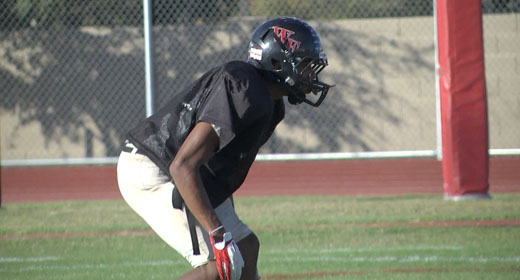 There were many that thought last week was going to be the end of the road for the Williams Field Black Hawks in the post-season taking on a tough Liberty team. But that was not the case as they knocked off the Lions to advance to the semi-finals for the second time in the last three seasons.

Two years ago, Williams Field made their deepest run through the playoffs in history. Just falling short to the cinderella Thunderbird Chiefs in the state championship game.

But that run led by the seniors on that 2010 team is paving the way for future success with this program. That is being seen with the play of the Black Hawks this season and from some of the seniors who gained great experience as sophomores on that state championship team.

“We really just try to show what it takes to get back to that state championship game,” said Williams Field senior defensive end Drew Buggesser who was a starter as a sophomore two years ago. “We tell guys everyday how we got there and how we plan to get there again.”

“They had amazing leadership when I was a sophomore from the senior class when we went to state,” mentioned Williams Field 1,000 yard running back Sean Schweichler who was also a member of that 2010 team. “Everyone just followed them and everything and it was just perfect and that’s how I’m hoping that we are going to react. Us being leaders.”

What has been deceiving about the Division III bracket this season is that there were so many teams that were either undefeated or had only one loss. It is not often that a team with just one loss is a five seed, but that’s the case for Williams Field. Because of that they could be somewhat floating under the radar. But if you asked the team, they are right where they expect to be.

“All season long we talked about what our goals are but right now we have a big task ahead of us in Desert Edge,” said Williams Field head coach Steve Campbell. “That’s what our focus is at.”

“I am expecting again to shock everyone,” Burgesser stated. “Of course they are probably picking Desert Edge to win but I think we have a really good team this year. So I think we are going to shock the newspapers.”

Desert Edge is one of those undefeated’s in Division III and the number one seed in the tournament. They survived a scare against the defending champion Saguaro Sabercats. Like Williams Field, the Scorpions were in the semi-finals as well for the first time in school history. But that would be as far as they go.

Both teams are looking to reach heights that both have not yet achieved.

“We have to eliminate big plays and take and put points on the board when we have the opportunity to on the offensive side of the ball,” explained Campbell. “That’s one thing we did better last week than we have done the week before and the week before that.”

Williams Field and Desert Edge face off for a trip to the Division III championship game on Saturday from Sandra Day O’Connor High School.