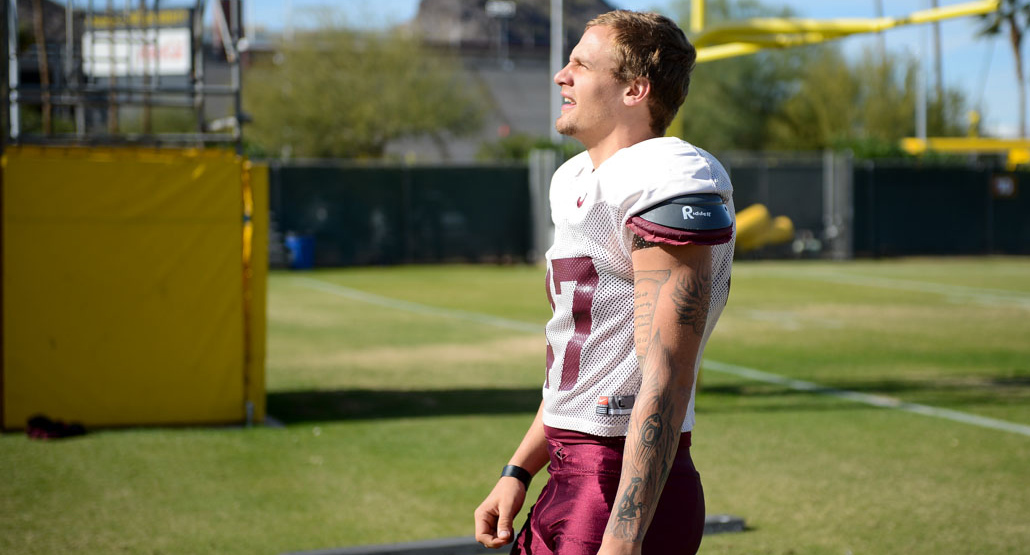 Standing 6’4 and weighing close to 235 pounds the former Scottsdale Desert Mountain High star, who could easily be mistaken for a linebacker, takes his kicking and life in stride.

He first took up punting, almost by default, as a sophomore in high school before honing his skill at Scottsdale Community College and eventually transferring to ASU for his final two seasons. One of the most popular and outspoken players on the team Hubner has let his right leg do the talking this season averaging 47.1 yards per punt which ranks third nationally.

Like golf, Hubner believes the mental approach to punting can be just as important as the physical side and when given the opportunity he takes a moment to go through a routine on game day.

“I like to go and just sit on the five-yard line,” he explained to Pros2Preps.com after practice Thursday. “I like to picture, if I’m in that situation, just getting that ball down inside the five-yard line. If you can convince yourself you’re gonna do it you’ve got a good mentality about [getting it done].”

But don’t for a second think Hubner takes his responsibilities on the field too serious. Whether it’s cracking jokes with teammates or imitating the Sun Devils coaching staff, no one really knows exactly what his next move is.

“He’s the type of dude that you don’t know what he’s gonna hit you with,” senior safety Alden Darby told Pros2Preps.com. “He’s a great ball of energy, excitement. He’s a guy that you can hang out with all day and just laugh 24 hours throughout the day.”

Nobody’s laughing at Hubner’s ability to change the game as arguably the best punter in the nation, especially first-year head coach Todd Graham.

“He’s had a huge role in us being able to change field position, impact field position,” he said. “He’s been a huge weapon for us. Very few balls have been returned because of his hang time. He’s a big time punter and one I think who’s going to punt for a living for awhile.”

Hubner says his main focus right now is helping the Sun Devils close out the 2012 season with a win over Navy in the Kraft Fight Hunger Bowl in San Francisco and then begin preparations for hopefully a shot in the NFL.

“It’s going to be a real quick couple of days [after the bowl],” Hubner said. “I’m going to make a decision about who I’m going to work with [as his agent]. From there it’s just training, trying to get a [NFL] Combine invite. Just getting people to notice you is the biggest thing.”

Something tells me Hubner won’t be difficult to find.