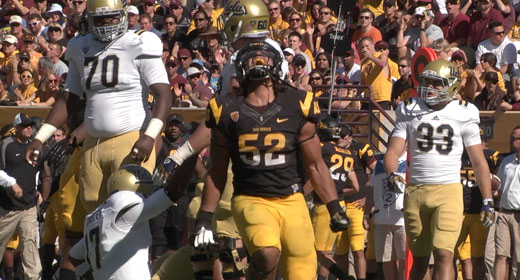 “It’s a very physical position so you have to be fast, athletic, and [strong],” Bradford told Pros2Preps.com after practice. “I fit that position very well because I’m a hard worker in the weight room. The first couple days I was iffy on it, but as the season progressed I got better and better at it.”

Playing alongside senior linebacker Brandon Magee and All-American defensive tackle Will Sutton, Bradford has found his niche tying Sutton for the team lead in sacks with 10.5 and finishing second in tackles for loss (17.5). He’s also tied for first in fumble recoveries (2) and fourth in total tackles (73).

“Carl Bradford’s had a huge impact on our defense,” Magee told Pros2Preps.com. “He has to blitz and play defensive end and middle linebacker. He brings a lot of pressure off the edge.”

Pressure is something all defenses need in the pass-happy Pac-12, but Bradford’s versatility has allowed him to play on both passing and rushing downs as the Sun Devils drastically improved their overall defense from a season ago.

Only a sophomore, the 6’1, 233-pounder from northern California is considered ASU’s strongest player and figures to only get bigger and better with more time in the program and on the field in future seasons.