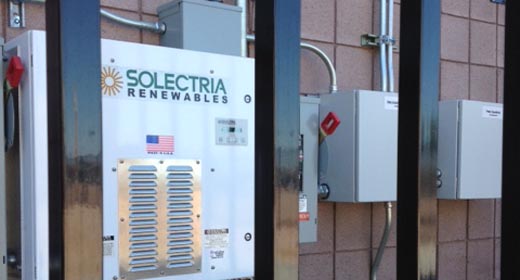 Leaping into the future of energy efficiency, Perry High School has officially entered the realm of modern technology.

A while back, solar panels were installed on the roof of the gymnasium. In turn, the structure is now powered on solar energy alone.

“They were the district’s decision, it was a pilot to see the results,” said Principal Dan Serrano.

For five kilowatts of solar energy, it costs an average of $14,000. Even though there is an impressive amount of money required for installation and preservation expenses, annual benefits of solar energy can exceed up to $2000 dollars a year saved. Nevertheless, every step that the district takes in the direction of independent energy utilization will help the Chandler Unified School District save money in the future, according to the Arizona Department of Environmental Quality.

“I think the solar panels are great,” says sculpture teacher Sharon Biemond. “Why not? If we are in Arizona anyway, why not use the unlimited sunlight?”

Still, what can Perry as a school do to pursue this aspiration of renewable energy even further?

“I think we should put solar panels on the tops of the rest of the buildings,” said student Jensen Penrod. “We should take advantage of it, its really sunny out so it’s a great source.”

With funding for education in Arizona limited by the state’s fiscal spending in a struggling economy, a budget to pursue green schools is unlikely to arise.

Luckily, if PHS continues to lower the cost of electricity bills by harnessing solar energy, the more likely the expansion of this valuable resource is to come.