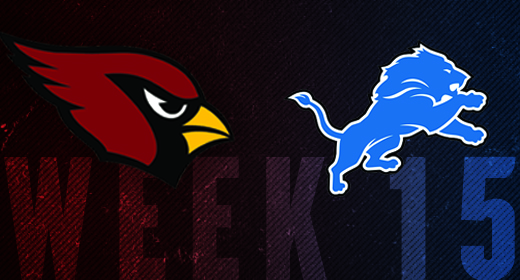 One week after an embarrassing 58-0 drubbing by the Seattle Seahawks, the Cards defenders returned to form pressuring and harassing quarterback Matthew Stafford and the Detroit Lions in a convincing 38-10 win Sunday at University of Phoenix Stadium in Glendale. The win snapped a nine-game losing streak dating back to September 30.

After a scoreless first quarter the Lions (4-10) opened the scoring in the second when running back Mikel Leshoure plunged in from the one to give Detroit a 7-0 lead following Jason Hanson’s extra point. The touchdown came one play after Matt Stafford connected with Calvin Johnson for 11 yards to the Arizona one. The 11-play scoring drive covered 73 yards in 5:04.

At the time of the score, the Cardinals (5-9) hadn’t scored a touchdown in 11 quarters dating back to the St. Louis game back on November 25. They had been outscored 72-3 to that point.

The Cards got a break moments later when Stefan Logan muffed a punt which was recovered by special teams standout Michael Adams at the Lions five. One play later they ended their touchdown drought when Beanie Wells plowed in to tie it up following Jay Feely’s successful PAT.

Later in the quarter Dave Zastudil pinned the Lions deep in their own territory and Arizona capitalized on another Detroit miscue when Patrick Peterson picked off a poorly thrown pass from Stafford and returned it 31 yards to the Detroit three. Two plays later Wells punched it in from a yard out to give the Red Birds the lead. It was Peterson’s fourth consecutive game with an interception and seventh of the season.

The Cards completed the turnover hat trick with under one minute in the half when safety Rashad Johnson stepped in front of a Stafford pass and sprinted 53 yards down the Detroit sideline making it 21-7 after Feely’s point after going into halftime. The Cards received a standing ovation from most of the 60,483 in attendance as they went to the locker room.

The first half wasn’t exactly a thing of beauty for the Cards offensively. Ryan Lindley was 8-12 for 58 yards with an interception. Wells rushed 10 times for 24 yards, but scored twice. Ray Horton’s defense limited Stafford (9-22, 85 yards) to a 14.4 quarterback rating and Johnson was targeted nine times, but had just four catches for 39 yards at the break. Calais Campbell had four tackles, two for loss.

The Birds pushed the lead to 24-7 at the 9:19 mark of the third quarter when steady Jay Feely connected on a 51-yard field goal that barely cleared the crossbar. It capped an eight-play, 30 yard drive. It was Feely’s 10th-straight make.

The Cards put the game away with just over five minutes to play. On fourth-and-two from the Arizona nine, cornerback Greg Toler stepped in front of another bad ball by Stafford and sprinted 102 yards down the Cardinals sideline making it 31-10. It was the longest interception return in franchise history.

“That’s about as bad as I can play,” Stafford who finished 24-50 for 246 yards and three interceptions said. “For us to be successful I’m going to have to play a whole lot better than that and I understand that.”

His counterpart Lindley wasn’t spectacular, but managed the game finishing 14-21 for 107 yards with one interception. He was sacked only once. Wells carried 17 times for 67 yards (3.9 per carry) and scored three times.

“It felt good to get a victory,” Wells explained. “We hadn’t had one in a long time. To get one is definitely fulfilling.”

Arizona will look to make it two in a row when they host the Chicago Bears (8-6) next Sunday.