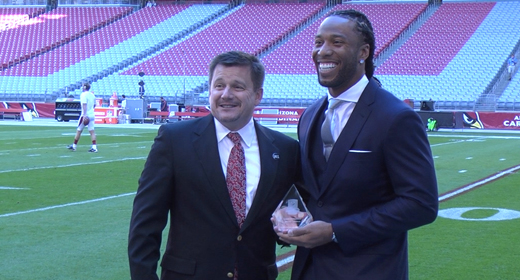 Larry Fitzgerald has done a lot in his eight years in Arizona as a member of the Cardinals.

One of the few accolades he hasn’t scooped up is NFL Man of Year, until now.

The team announced on Saturday that Fitzgerald is their  2012 “Arizona Cardinals/Walter Payton NFL Man of the Year.”

It was made official on Sunday when team president Michael Bidwill presented Fitzgerald with his award.

The award highlights a player’s community service as well as his stellar play on-the-field.

Fitzgerald started The Larry Fitzgerald First Down Fund, which provides funding for positive activities for youth in Arizona, Minneapolis, Minn. and Chicago, Ill.

Fitzgerald is also heavily involved with the Carol Fitzgerald Memorial Fund, which was created in honor of his late mother, who passed away from breast cancer in 2003.

The organization educates the youth about HIV/AIDS and breast cancer issues.

Fitzgerald will find out if he won prior to Super Bowl XLVII in New Orleans, La.

Finalists received $5,000 for the charity of their choice from NFL Charities, and the winner receives a $25,000 donation.