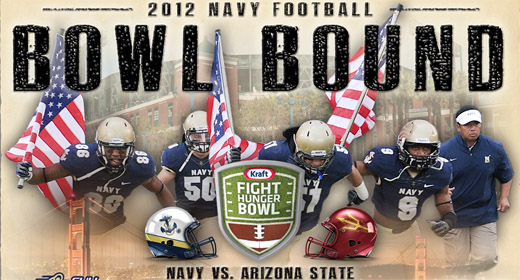 As the head football coach at the Naval Academy, Ken Niumatalolo doesn’t need to deliver a bunch of motivational speeches. He doesn’t need to worry about his players being disciplined. He doesn’t have to wonder if his team will be ready to play when they take the field.

Arizona State (7-5) will get an up close and personal look at this when they take on the Midshipmen (8-4) in the Kraft Fight Hunger Bowl on the 29th at AT&T Park in San Francisco.

“We’re a team that just continues to keep fighting,” Niumatalolo told Brad Cesmat Tuesday on ‘Big Guy on Sports.’ “We understand who we are and we need to be hard workers and lunch pale-type of guys and that’s what we keep doing.”

Life is different at the service academies on and off the field.

At Annapolis football isn’t the priority. Far from it, actually.

Not only are Niumatalolo’s players student-athletes they’re soldiers with strict military responsibilities. Combine the three and there is little, if any, down time unlike at most universities where players must focus their attention on their school and sport only.

“Trying to balance all of those three and all of them you have to be successful at to survive [at Navy] and graduate from here,” Niumatalolo articulately conveyed to Cesmat. “It can be a tall order, but our guys continue to work hard…you coach great young men. Young men of great character, integrity, and work ethic so in the end it all balances out.”

He said a player’s typical day starts around 6:00 a.m. if they need treatment for injuries before formation at 7:00 where they gather with their companies. That is followed by classes most of the day, then practice from 4:00-6:00 p.m. Following the workout, they eat dinner and return to write papers or study for upcoming exams.

“Places I’ve [coached at] before,” Niumatalolo explained. “When guys are in meetings they’re normally hanging around the football office in their free time. Their free time here, they don’t have any…they’re doing other things.”

All student-athletes must wear uniforms which must be in with regulations along with their hair.

Niumatalolo said the Midshipmen are rarely booed when they play out of respect from their competition. Most games are ‘Military Appreciation Day’ when the Midshipmen play on the road.