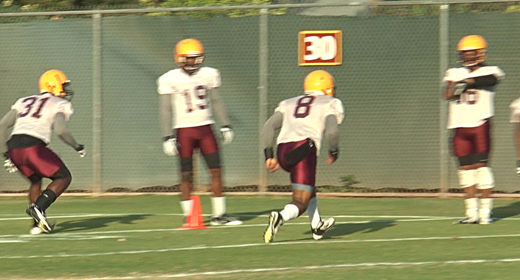 For the Sun Devil football team, it was a topsy-turvy season to say the least.

The most important thing is that they got through it with no devastating injuries to any of their key players [just bangs and bruises a season normally brings], and they beat the Wildcats in their own house.

Finishing 7-5 in head coach Todd Graham’s first season and being bowl eligible all speaks for itself.

The team will be on the Territorial Cup high until the two teams square off at Sun Devil Stadium next year. However, until then, the team has started preparing for the postseason, and whatever bowl game they’re headed to.

Most insiders believe Arizona State (7-5) will face the Naval Academy (7-4) at the Kraft Fight Hunger Bowl in San Francisco, Calif., on Dec. 29 [Navy is already committed to playing in the game].

No matter who they play or where they play, Graham says his team will be ready to roll.

“We’re very excited to get that eighth win,” Graham said. “The bowl experience is great, but we want to win. We want to win for these seniors, win for this program and obviously that’s our focus.”

To close out the regular season by beating both Washington State and Arizona put the Sun Devils in a good position to play in a “better bowl game,” according to senior running back Cameron Marshall.

“It kind of puts your team in high spirits going into the bowl game,” Marshall said. “We’ll have respect for whoever we end up playing, but we’ll have high spirits and we’ll be confident in ourselves.”

Having confidence is great heading into game No. 13, but being in proper physical condition and film study is just as important says senior linebacker Brandon Magee.

“You just gotta stay in shape,” Magee said. “Coaches say all this about watching film, but when I watch film, I watch myself and learn how to correct my mistakes that I made previously.” “Staying in shape, working out with Coach Gris [Shawn Griswold], out here running every day, so you know our coaches [aren’t] gonna let us slip at all.”