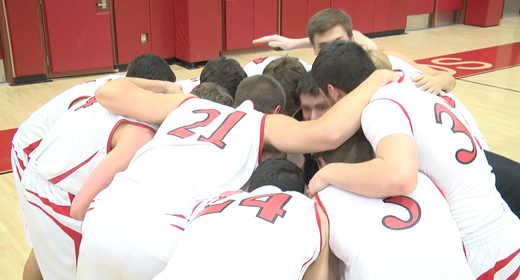 Two very good basketball teams in the northeast Valley met up on Thursday looking to make a statement early on this season. The Pinnacle Pioneers who have been very good so far in the season minus a slip up against Deer Valley. However they responded a few days after their loss to Deer Valley by beating them by 38 points. The Chaparral Firebirds looking to make it two straight after falling to Brophy.

The game was a track meet as most teams love to get out and run. Chaparral took an early lead and their unbelievable shooting as a team from the outside paved the way to a surprising 91-64 final score.

“We just wanted to come out early and defend, take away their possessions and have good looks for us” said Chaparral head coach Daniel Peterson. “I told our guys hey be confident in your shot. Step up, knock it down and let’s get all kinds of good shots for our game tonight.”

Chaparral has the big bodies down low in Joe Boyd and Eric Conklin and while they were factors in the game, the Firebirds shooters on the outside was relentless. Shane Cooper got it done leading all scorers with 19 and Troy Conley’s high arching shot adding 15.

“Playing with them (Pinnacle) almost filling what we want to do as well,” explained Peterson. “We feel that our players can run with anyone.”

Pinnacle’s dynamic duo of Dorian Pickens and Drew Bender tried to keep it close. Pickens (16 points, 9 rebounds) lead the team on a run in the first half and Bender (15 points) in the third but their turnovers and the Firebirds shooting was just too much.

Chaparral moves to 6-3 on the season and Pinnacle falls to 5-2.