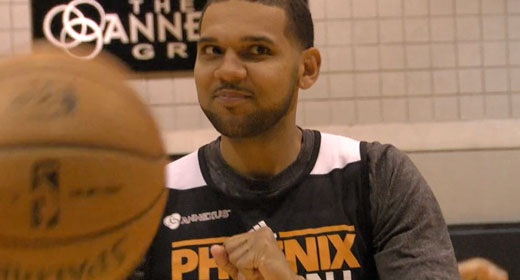 With Nash gone, Hill gone and a crew of new faces on this Phoenix Suns roster, a few different players spoke up before the season began explaining how they needed to step up and lead this team.

There was Goran Dragic coming back and taking over the point guard position, Marcin Gortat’s outgoing and honest personality, Michael Beasley being brought in to be the number one scoring option and of course the longest tenured player on the team, Jared Dudley. Of all of them, Dudley to me seemed the most believable but could he overcome his funny and laid back personality?

It may not have been the case at the start of the season as he found his minutes decrease and being taken out of the starting lineup. But over the last couple weeks and especially during the Suns current winning streak where he was placed back into the starting lineup, it has absolutely been the case as he has averaged 18 points, just under five rebounds per game and bringing as much energy to the floor as he could possibly bring.

A quote I learned back when I was in high school and what I have tried to apply in my life is ‘a leader is one who knows the way, goes the way and shows the way.’ When I look at what Jared Dudley has done in this short season, in my eyes he is living up to that quote. He got off to a slow start but knew what he needed to do to get back to himself. He stayed even keel while coming off the bench and did his job and now back as a starter he has done all of the little things that he has always done which helps make the team successful.

Jared Dudley isn’t the type of player that will carry a team, he can continue to do what he is doing and it might not necessarily result in a Suns win every night. But hard work and strong effort can be contagious.

Dudley is showing the way, now it is up to the rest of the team to follow his lead.