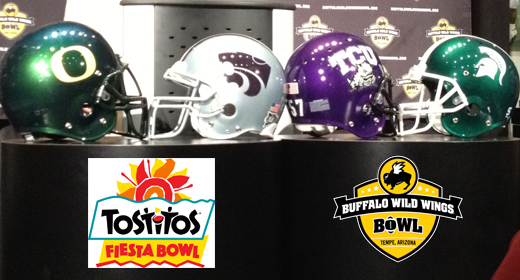 Bowl season is upon us and there was excitement in Scottsdale on Sunday night as the Fiesta Bowl announced Oregon and Kansas State will be coming to the Valley for the BCS Tostitos Fiesta Bowl match-up on January 3. Also announced was the Buffalo Wild Wings Bowl featured TCU and Michigan State.

“We couldn’t be happier with this match-up,” said Dr. Robert Shelton, Executive Director of the Fiesta Bowl, “going to be exciting for the fans whether they are going to be here in person or watching on tv.”

Oregon lost out on a chance to play for the PAC-12 title with a loss to Stanford and was chosen as an at-large berth into the Fiesta Bowl.

These two teams have never faced each other, but both come from stories programs.

Oregon finished fourth in the final BCS rankings. The Ducks are ranked first in the Pac-12 Conference and second nationally in scoring, averaging 50.8 points per game.

K-State finished fifth in the final BCS rankings, which marks the highest finish ranking in school history. On November 11 they held the number one spot, which was a school first. The Wildcats rank 10th nationally in scoring offense putting up 40.7 points per game.

If these numbers are any indication the Tostitos Fiesta Bowl is going to be a high scoring affair. Kickoff is set for 6:30 p.m. at University of Phoenix Stadium.

On the flip side, the Buffalo Wild Wings Bowl stacks up to be a defensive battle.

“Two teams that have really had superb years,” Dr. Shelton said. “Michigan State has a great defense, all 5 of their losses in the Big 10 have been by three or fewer points. They have been in every game this year. TCU in the first year in the Big 12, they are really stimulated to show what they’ve got.”

Michigan State led the Big 10 in scoring defense with 16.9 points per game, while TCU led the Big 12 in total defense at 332 yards per game.

This is only the second time these two teams will meet. The first was back in 1953 in Lansing, Michigan where MSU beat TCU 26-19.

Both of these schools are making their first appearance in the bowl set for December 29 at Sun Devil Stadium. Kickoff at 8:15 p.m.

Fiesta Bowl tickets are going fast, so visit fiestabowl.org to purchase them before they are gone.