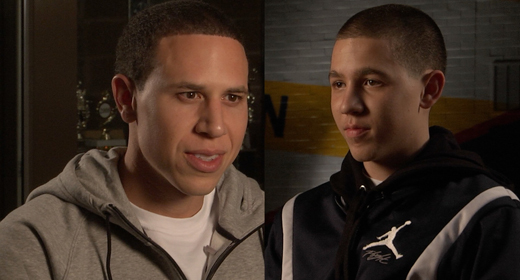 In the late 90s, Mike Bibby led Shadow Mountain to their first ever basketball state championship. He then went on to the University of Arizona where he brought back the first basketball National Championship to Tucson before beginning a long and successful NBA career that has been full of playoff runs and finals appearances. Still to this day, he is one of the best basketball players ever to come out of the state of Arizona.

Shadow Mountain retired his number 10 jersey and it has not been worn once by anyone at the school until this season. The young man sporting the number 10 now is none other than Bibby’s son, Michael Bibby Jr. And now the second generation of Bibby at Shadow Mountain is the starting point guard for a young up and coming Matador team that has already won more games in 2012 than they did in 2010 and 2011 combined. Bringing back the winning tradition the school had and making the future as bright as its ever been.

For part one of my conversation with Mike Bibby and Michael Bibby Jr., I talked with them about the honor of bringing back the number 10 Shadow Mountain jersey and what it means to them both. How Michael is learning from his father from workouts and drills to watching film. And finally, the two of them sharing a bond in basketball which is very near and dear to both of their hearts.