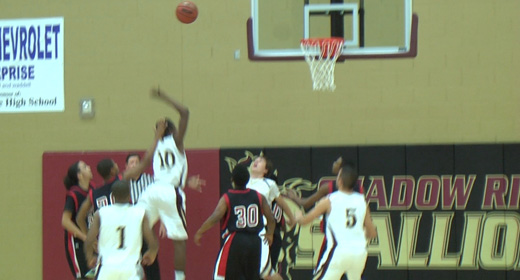 Shadow Ridge guard Brandon Clark scored 13 of his 20 points in the first half against Dysart, as the Stallions – fresh off winning the NGS Page Tournament – continued their winning ways by dropping the Demons 68-47 on Tuesday night.

Shadow Ridge improves to 5-2 with the win. Dysart falls to 5-4 with the loss.

Clark had four three-pointers on the night, as Shadow Ridge scored first and never looked back.

Clark talked about having a floor general like Gibbs, who is very giving to his teammates.

“I feel more comfortable,” Clark said. “I feel like I can do my game, I can score more and we have better team chemistry.”

There’s three things the Stallions do very well: spread their personnel out on offense, move the ball on offense and play sound defense. All three were on display on Tuesday. There were lull moments in the game where Dysart took advantage of Shadow Ridge being asleep at the wheel.

However, when the time came for a play to be made on either end of the court, Gibbs and the Stallions were ready.

Shadow Ridge took a 30-20 lead into the intermission, then turned on the jets in the second half, outscoring Dysart by 11 in the final 16 minutes of basketball.

“In the second half, as we saw them getting tired, we started attacking them even more,” Gibbs said. “It was a great overall game, Brandon [Clark] had a great game today, [and ] we’re just looking to execute our plays and execute on the fast break end.”

Head coach John Braden talked about defense, and how crucial it was for the team to play it properly in order to come out on the winning side.

“We talked about it, close out under control,” Braden said. “For the most part we had five people in there working together, closing out, working hard to get some rebounds and box out, so I was very happy with our effort on the boards.”

Next up for Shadow Ridge: a rematch with Kellis on Thursday night.

These two teams met in the semifinal game of a tournament this past Friday, a game Shadow Ridge won 103-94 in double overtime.

Dysart will get back to business on Thursday as well, as they host Verrado.