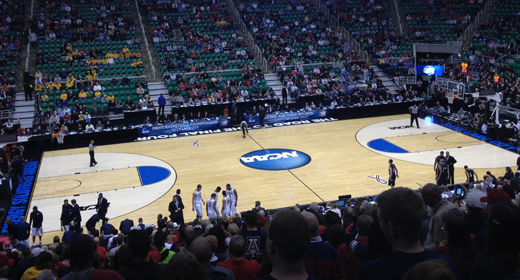 For the Wildcats, the lucky number is seven. After knocking out the 14th seeded Harvard Crimson in round three of the NCAA Tournament by the final score of 74 to 51, Arizona notched their seventh win in an NCAA Tournament game in Salt Lake City. That is their most at any Tournament site. The Wildcats are now 7-0 historically against IVY League schools.

“We wanted to keep our composure,” said Arizona senior Kevin Parrom. “We didn’t want to be penciled in in this game, we wanted to earn it. And that’s what we did. We knew they were a great three-point shooting team just like Belmont. Maybe better. I think we did a great job defensively. We made them work.”

And work they did. Harvard started off game 0-13 leading to Arizona 17-2 start. Siyani Chambers finally knocked the lid off the hoop with a three with just under 12 minutes left in the first half for the Crimson’s first field goal of the game.

“We came in with our game plan similar to Belmont’s,” explained Arizona freshman Brandon Ashley. “They did have some open shots that they missed but we did have our intensity wretched up and we did play well defensively.”

Mark Lyons picked up right where he left of from his 23 points against Belmont. He had 11 points at halftime and then added 14 of the Wildcats first 19 of the second half. Finished with a season high-tying 27 points for the Wildcats.

“He (Lyons) may be a smaller guy but he still has a heart of a lion,” mentioned Ashley. “His last name is Lyons.”

Wildcats freshman forward Grant Jerrett left early in the game after taking a hard fall on his elbow. It was called a bruised elbow and he did not return to the game.

Harvard did start knocking down some shots to close out the first half upping their shooting percentage to 25%. Problem was Arizona shot 58% and took a 40 to 22 lead into halftime.

The Crimson would bring the lead back down to 14 in the second half but that was as close as they would get thanks to stellar play from Lyons who prevented any sort of Harvard run.

The Wildcats continued their excellent rebounding carrying over from their win over Belmont on Thursday. In that game they had a 44-18 rebounding advantage. Against Harvard they had a 39-33 advantage.

Arizona had it’s depth on display as well as eight players scored in the game for them. Adding to Lyons’ 27 was also Solomon Hill’s 13, Jordin Mayes’ eight and Nick Johnson and Kaleb Tarczewski added seven.

The Wildcats now move onto the Staples Center in Los Angeles and the Sweet 16 this coming Thursday. They will take on the winner of 10th seeded Iowa State and second seeded Ohio State.

“It feels great.” Johnson expressed. “It’s something that I have wanted to achieve since I was a little kid. So it definitely feels great but we are not done.”