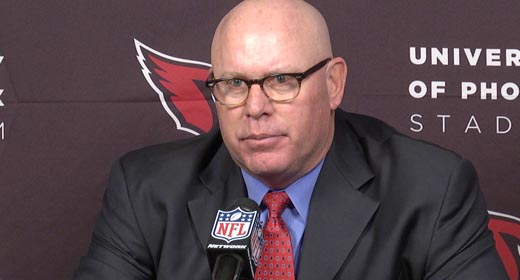 As with any incoming head coach Bruce Arians wanted to change the culture after being named head coach of the Arizona Cardinals a few months ago.

After cleaning the slate it appears Arians’ master plan to rebuild the Cards is taking shape with Carson Palmer his new starting quarterback (one of over 20 off-season roster moves) and additional help coming (likely on the offensive line) through the draft in a couple weeks.

One well-respected source believes Arians is the right guy to lead the Cards moving forward, even in a loaded NFC West.

“No question about it,” Sports Illustrated and NFL on NBC insider Peter King told Brad Cesmat Thursday on ‘Big Guy on Sports.’ “Bruce Arians was handed an impossible situation with the Indianapolis Colts…he came in and coaches the team for 12 games and goes nine and three. He went against the grain of what so many NFL teams do. He said I’m going to throw the ball downfield.”

King said Palmer is the perfect fit in Arizona.

“If you asked Bruce Arians,” King explained to Cesmat. “You give him sodium pentothal two months ago and you say tell me one guy…in trade, waivers, free-agency, in the draft…he would have told you Carson Palmer. He believes Carson Palmer is the guy who can do the best job to get the ball 30 to 40 yards downfield with some degree of accuracy.”

The long-time, well-respected writer will be hosting a tweep up April 19 from 5:00-7:00PM at Tom’s Tavern in downtown Phoenix with all proceeds benefitting the Pat Tillman Foundation. Select Cardinal players will be on hand. Your $40 ticket will include food, beverage, and a Q&A with Michael Bidwill, Steve Keim and others. King will be running in Pat’s Run April 20 in Tempe.

“I just decided, especially because of my great regard for Pat over the years, it’s something I really wanted to help with.”