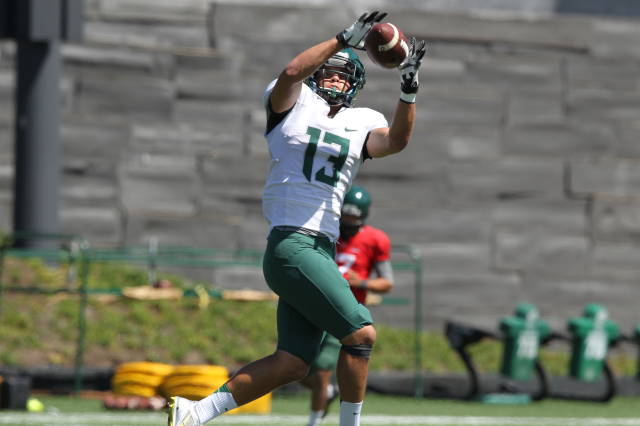 The life of a collegiate athlete is as busy as they come these days. From practices, to meetings, to community involvement, to the games themselves and of course, the school work.

An unfortunate dying breed in our country is the two-sport athlete, especially at the collegiate level when most athletes are forced to choose one over another. One who made it a requirement to be able to compete in two sports during his recruitment was former Brophy star and now Oregon Duck, Devon Allen.

It is one thing to say competing in both track and football is what you plan to do while being recruited, it is another to live it. Right now, Allen is chin-deep in the busiest time of year in quite possibly his life.

Allen arrived on the campus of the University of Oregon last fall as new student looking to establish himself in a new environment. Arriving last summer to gear up for fall 2013 football camp, Allen ultimately opted to take a redshirt season mostly because of an injury he had been dealing with back from his time in high school. It was a tough decision he had to make at the time.

“I thought it was a good thing,” he explained. “It gave me time to get the offense down. The thing about being on the scout team, I guess people kind of look down upon it but for me it was the opportunity to go up against first-team defenses. So for me being a scout team receiver, I was going up against them every day and was getting better. So it was definitely helpful going that route.”

From the start, Oregon consisted of some familiarity for Allen. Not necessarily because of the environment, but because of some of the people that were present. The Ducks have done a great job recruiting Arizona over the last few years. With the contingent of players coming from the valley, Allen said that some of those guys looked out from him in the beginning when he first stepped foot on campus as he became acclimated with the program and the community.

“Tyler Johnstone (Hamilton), Sam Kamp (Mesa Mountain View), Andre Yruretagoyena (Chaparral), those guys kind of looked out for me when I first got here,” Allen said. “Reggie Daniels (Hamilton) is there too and I arrived with Kani Benoit (Thunderbird) as he was a freshman as well. Those guys were always around to help you out.”

The Ducks football season came and went pretty fast for Allen. While that first fall semester of getting comfortable with college life as well as being a member of a major football program was busy, it was nothing that he had coming in the spring.

Allen is currently participating in both track and spring football like he had planned on doing. Because of it, Allen might be one of the busiest people you will come across on Oregon’s campus.

Monday, Wednesday and Friday’s it is all about football. From 7-8:30AM there are film sessions, 8:30-11AM they get out to the field for practice, he then makes time to shower and eat before classes and tutoring begin around noon which goes until 5PM. From there it’s back to the football facility for meetings until 7PM when he can then go home for the day. Sometimes on Friday’s, it is all of that plus out to the track practice field for smaller workouts consisting of baton passing, etc.

Tuesday’s and Thursday’s are just as busy. Allen will be back out at the football facility from 7-11AM for special teams and position specific film sessions and meetings. From there, that’s when life begins to switch to track. After class at noon, track practice begins around 3PM which is ordinarily the last thing on his plate for the day unless he decides to meet with a tutor before he goes home.

Amongst all of that, the weekends have consisted of track meets. No scout team or redshirting for Allen on the track, he has become one of the best performers for Oregon as a freshman.

Some of his best results consist of:

-Winning the 400m hurdles with a time of 52.56 in the Oregon Relays as well. Oh by the way, Allen had football practice in the morning about six hours before the start of the Oregon Relays.

After football practice this morning, Devon Allen wins the 400m hurdles with a personal best time of 52.56. Eventful day for the freshman.

“The football coaches said to me ‘after that maybe you should practice everyday before you go to run.’” Allen joked. “I told them no, I think my body might start to break down.”

The average person might look at his schedule right now and their body might break down just reading it to themselves.

For the rest of this track season, Allen has his sights on the postseason with the Pac-12 Championships as well as the West Regional and National meets to close out his freshman year. For the Pac-12’s on May 17-18, teams will bring a certain number of athletes and those athletes can participate in any number of events. Allen expects to represent Oregon and anticipates competing in the 110m and 400m hurdles plus the 100m and 200m dashes depending on how well he is running at that point in the season. He will also be a member of the 4X100 relay team and an alternate for the 4X400.

The top forty times in each event throughout the season qualifies for the the West Regional (consisting of schools west of the Mississippi) and Allen fully expects to be in position to compete in the 110m and 400m hurdles plus possibly the 200m after running a 21.2 back in March. The top 12 times from the West Regional qualifies for Nationals which will take place from June 11-14.

With all of that on his mind, so is football. This spring with a redshirt season behind him, he now expects to crack the depth chart for the Ducks next fall. Based on feedback and how he feels he has played, that should most definitely be the case.

“I feel confident in how my spring has been going so far,” Allen mentioned. “From me talking to the coaches I definitely feel like I am going to get the chance to play. I am feeling more comfortable and am starting to realize that I think I can compete at this level. I really feel a lot more comfortable than I did in the fall when everything was really fast.”

An important person in Allen’s life over the last year has been Oregon’s star quarterback Marcus Mariota. The Redshirt Junior signal caller opted not to enter the NFL Draft this year with hopes to build on what was a very impressive 2013 season for him.

“He is a real stand-up guy,” Allen mentioned. “When I first got here he was always willing to lend a helping hand. He would ask if I needed anything, asked if I wanted to go out and run routes and throw with him. He is just one of those guys who is the best athlete on the field but doesn’t talk about it too much. He’s very humble and he is one of those quarterbacks when I am not in, is very cool to watch.”

You know someone is an incredible athlete when a versatile two-sport athlete like Devon Allen is blown away by how great of an athlete Mariota is.

“Oh my gosh he is so fast,” Allen said. “He would do amazing track. It’s funny, he actually was going to run on our 4×100 team before spring break but Marcus ended up going back home to Hawaii that weekend so he couldn’t compete. But that would have been sick. He is really fast.”

Mariotta will not end up running this season but Allen said how cool it would have been to see it and how fun it would be to put together an all-football 4×100 team. Only at Oregon could that idea be flirted with.

Allen is continuing his way through spring football and is gearing up for the year ahead which will consist of big expectations for not just himself, but his team which is coming off of a 2013 season that failed to live up to National Championship aspirations.

“We were all kind of disappointed with how our season ended up,” Allen explained. “But I think we all know that we have so many athletes and playmakers on the field and if we continue to get better as a team, we can compete for a National Championship every year.”

“Some of the guys on the team are really stepping up as leaders,” he added. “Coach (Mark) Helfrich has said that this has been of the highest energy and most physical spring’s that he’s been around which I think is a good thing. Now we just need to take it to fall camp and then into the season and I think we will do well.”

Allen continues to be an Arizona native to keep an eye on. He once said, that he and his Dad would talk about how incredible it would be to be in position to one day win a Super Bowl and a Gold medal. A lofty goal but with a stretch like this in which he is currently working his way though with spring football and track, it is without question a giant step in the direction toward his dreams.