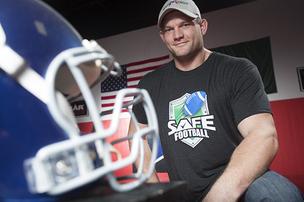 The issue of concussions in football has become a bigger and bigger concern as technology evolves and research intensifies. However, technology and research can only do so much at the end of the day for a sport that is violent after all.

Introduce SAFE Football. A program created by former Arizona State and NFL offensive lineman, Scott Peters, whose goal is create a safer and more effective way to play the game of football.

“What we do with SAFE Football is we teach coaches, we teach players and we teach the football community a more effective way of playing football with your hands versus our helmet,” Peters explains. “It has been adopted at the highest levels of football from the NFL down.”

Creating leverage from your hips up through your shoulders and hands is the name of the game and not leading with your head. Peters explains that it isn’t necessarily the big helmet to hemlet collisions that can cause a consussion or long-term head damage, it is the repeated blows to the head over and over again from players, expecially in the trenches, that lead with their helmet. The SAFE Football way is not only safer, it is also more effective using techniques that are also commonly used in mixed martial arts as well as wrestling.

Former Arizona Cardinal Gabe Watson, a one-time teammate of Peters, believes in this method and is joining Peters for his clinics.

“This is something that Scott and I didn’t have growing up in high school,” Watson said. “We had to learn using our heads literally, and we found out later on that it was the wrong way. The concepts really work and I am behind it.”

Also partnered up with Peters with SAFE Football is former ASU All-American and Super Bowl Champion Grey Ruegamer who acknowledges the concern that parents might have with their kids playing football but notes that learning techniques like this could allow kids to be trusted on the field.

“Parents don’t want little Johnny to play but there is a safer way to play it,” Ruegamer stated. “That’s why we are out here. To make sure the game stays around with better techniques. It can be a safer game. It just has to be taught.”

“So what we are trying to do is trying to provide resources and tools, not just at the highest level of the game, but really where it matters most which is at the high school levels,” Peters mentioned. “That’s when kids really start making contact and that’s where it can change from generations going forward.”

Peters and company have taken that approach into valley high schools this spring. They are meeting with coaches from the Chandler Unified School District now for the second consecutive year. The positive feedback they have received from the major programs out in the Southeast Valley have and ignited interest from all other parts of Phoenix as well. The Mesa, Paradise Valley, Higley, Queen Creek and Peoria schools districts are bringing SAFE Football Camps to their campus in 2014.

“We can save the game,” Peters states. “It’s really what we are trying to do.”