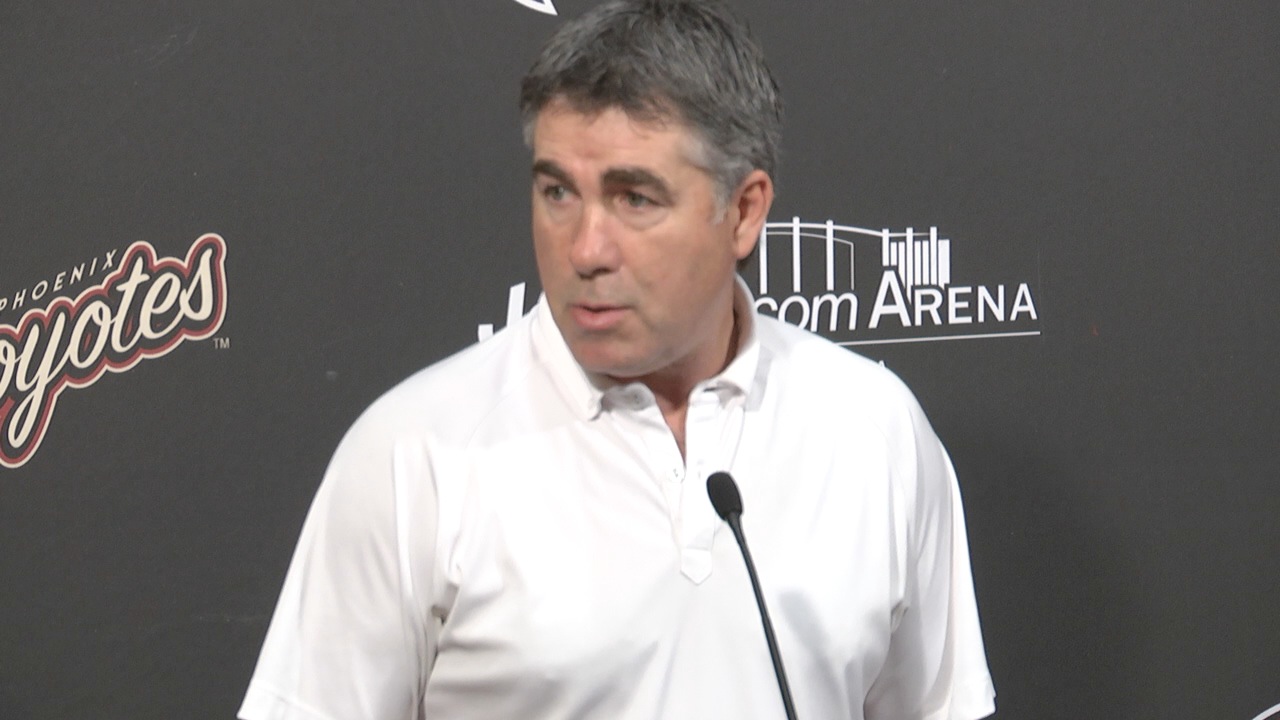 Co-Owner of the Phoenix Coyotes Anthony LeBlanc took the podium on Monday, a day after the 2013-14 season came to an end and made a very interesting point.

Despite the fact that there is great disappointment that the team did not make the playoffs this season, the most common thing that he heard from fans as his first season as owner came to an end was they were just happy that the team was still here and there is no uncertainty moving forward.

It is true what a difference a year can make. You sit in that press conference room in April of 2013 and as player were cleaning out their lockers and coaches were expressing their closing remarks, there was the feeling that it could be the last time they do so at Jobing.com Arena. Fortunately for the hockey fans in the desert, April 2014 has a much more exact and positive tone from a franchise stability standpoint. But there was still that same feel disappointment when you compare the last two Aprils.

With stability for the franchise came expectation. Not just for the fans and the new ownership group stepping in, but from the players, coaches and General Manager too. It was the fact that not making the playoffs now for the second consecutive year is something that in their eyes, is not acceptable.

So the theme for the locker room clean out day at Jobing.com Arena on Monday, despite the organization’s stability, was frustration and the need for change.

“We have to take steps forward,” Coyotes Head Coach Dave Tippett said on Monday. “Whether that’s going to some younger players that make you better and give you energy, maybe that’s supplementing some of the players that we have. All of those things are up for discussion.”

Tippett went to some of his younger players to try to create an extra burst in the late stages of the season when he decided to bench some veterans including Mike Ribeiro as an attempt to send a message.

General Manager Don Maloney looks at three major factors when he puts together his hockey teams and has said he will not change it moving forward. He looks at goaltending and mentioned he liked what he got out of Mike Smith, especially down the stretch before he got hurt. He looks at coaching and stated that their head coach is “second to none.” And he looks at chemistry which this season was an underlining problem with this team and a youth movement could be a solution.

If you ask they players, they don’t want to see much change. They believe, at least on the outside, that they can win with the guys they have. It is very much like hockey players to show devotion to their teammates no matter what. But as the biggest cliche in the pro sports world states, they know it is a business.

“We have no one to blame but ourselves in here,” explained Goalie Mike Smith. “Unfortunately in this business when you don’t win, changes are made. I think it’s disappointing because I think we had a good group in here but two years now of making the playoffs I would think and hope that it is not accepted. So I am sure there are going to be some moves made.”

The Coyotes have pieces that think think are critical to their success. The great captain in Shane Doan who was off to as good a start as ever before he got that rare virus and was never the same. The established goalie in Mike Smith who even himself would like to see more consistency, but has shown he can be lights out in critical times. The future superstar in Oliver Ekman-Larsson who had another great season.

Where the team moves from there, remains to be seen. Other than looking back their team’s MVP for this season Antione Vermette, there seems to be a push for a young and hungry player to get the identity back with this team that got them to the Western Conference Finals two years ago.

The work begins all over again this off-season as the next big date points to the 2014 NHL Entry Draft on June 27-28. It is then when Anthony LeBlanc announced that they team will be officially known as the Arizona Coyotes moving forward.

Devon Henry ·
@devonhenry77
Time for more previews of the AZHS football action on the west side this Friday night!