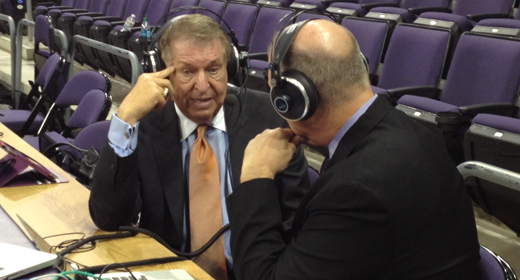 Nobody’s been under the microscope more in the past few days like Los Angeles Clippers’ owner Donald Sterling.

His recorded racial comments which were leaked by TMZ on Saturday started a firestorm of controversy stretching far past the sports landscape. President Obama even echoed his disappointment in Sterling’s rant with girlfriend V. Stiviano, which included urging her not to bring her black friends to Clippers games.

New NBA Commissioner Adam Silver addressed the media over the weekend and there is another press conference scheduled Tuesday in New York to announce “additional details” regarding the matter.

“I believe it’s a defining moment for Adam,” USA Basketball chairman Jerry Colangelo explained to Brad Cesmat in a phone interview Monday. “But what an opportunity to make his mark early on in his commissionership.”

The former Phoenix Suns owner and Arizona sports icon believes it’s important Silver takes every pre-caution before issuing the punishment, whatever it may be.

“Many people are reacting violently,” Colangelo said. “It’s very emotional. I get it. I understand it and I would tell you I feel the same way but we have to let this happen. Let it take its’ due course to be sure that it is him.”

Many have asked Sterling to be removed from the team he has held ownership in since 1981 when he purchased the then San Diego Clippers for $12.5 million. Colangelo relayed it’s simply not that easy.

“You now start talking about an asset that’s probably worth $700-800 million you don’t just make an announcement that you’re pulling it,” Colangelo said. “There are many, many intricacies. There are a lot of legalities involved.”

He said, it the allegations are true, it could be an ugly ending from Sterling.

“You make a mistake like that…if it’s accurate…it could be life-changing.”

The Clippers, who were blown out by the Warriors in Game 4 of their Western Conference first-round series Sunday afternoon in Oakland, didn’t practice Monday. Game 5 is scheduled for Tuesday night in Los Angeles. The best-of-seven series is tied at two.