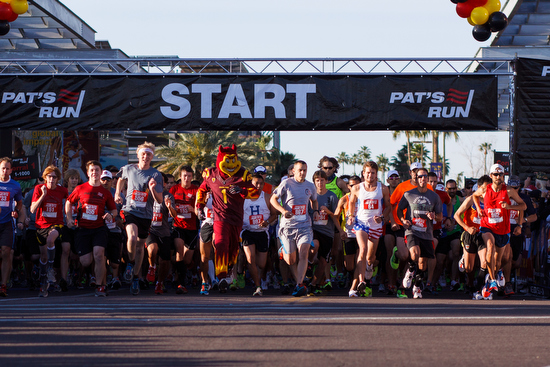 No one will ever argue Pat Tillman didn’t live life to the fullest.

Despite only being on this earth 27 years, Tillman’s legacy not only lives on but grows stronger each year through The Pat Tillman Foundation and annual Pat’s Run in Tempe.

It’s hard to believe this past week marked 10 years since Tillman’s tragic death in Afghanistan.

“Pat Tillman has become and rightfully so, a tremendous inspiration to a lot of people for all the right reasons,” McGinnis told Sports360AZ.com’s Brad Cesmat in a recent phone interview. “But people don’t understand how selfless he was. He had some magic to him.”

McGinnis said Tillman would mentor some of his friend’s teenagers as they were transitioning into college and other life challenges of adulthood.

“He was everything to a lot of people because he related to so many different types,” McGinnis said.

Saturday close to 30,000 people will continue to honor Pat’s legacy with the 10th annual Pat’s Run which ends on the 42-yard-line inside Sun Devil Stadium.

“I think Saturday is the state’s greatest day,” Arizona State assistant athletic director of media relations Doug Tammaro told Cesmat Friday morning. “Anyone that would come to it would agree.”

Tammaro was at ASU during Tillman’s college playing career from 1994-97.

The respect of Tillman even created a bond of sorts this week between ASU and in-state rival Arizona, who also have Tillman scholars on campus.

A true hero. RT @ASU Today we remember Pat Tillman and the legacy of service that he left behind. #RIP #PT42 pic.twitter.com/DLYcXosWSW

“He’s someone that everyone admires and everyone can learn from,” Tammaro said.