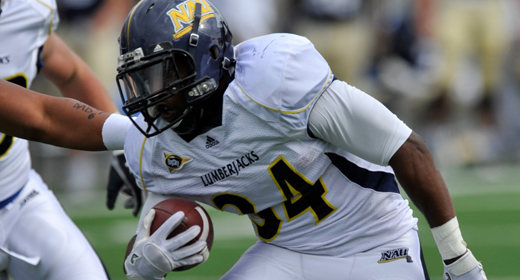 Back in February of 2008 when the Arizona Cardinals competed in their first ever Super Bowl, Zach Bauman was just a junior in high school and had just finished his first season as a starter at running back for Hamilton.

“I remember it brought a lot of joy to the city,” Bauman said. “It would have been great to see them win but just the fact that they made it to the Super Bowl at the time was great for the whole city.”

Little did Bauman know at the time, that he would one day be connected to those Cardinals in the not so distant future.

Bauman has defied the nay-sayers for as long as people have seen him on the field. He was the primary ball carrier for two state championship teams at Hamilton putting up big numbers and making big plays. However, he seemed to be somewhat under-recruited until Northern Arizona snatched him up and brought him up to Flagstaff.

From Hamilton to NAU to the Arizona Cardinals hometown kid stays home! #BirdGang

Whatever the reason behind the avenues for Bauman to get to where he is today, it has all happened for a reason. That reason was for him to be able to continue to stay where it all began. In his home-state. It has been a constant formula for success for him and it has been and continues to be because of who he has in his corner.

“My family is always behind me but to literally have my family with me through all of this means everything,” Bauman mentioned. “Being able to play for your hometown team is a great experience.”

Draft weekend was one filled with uncertainty for Bauman. He hadn’t heard from many teams during the draft process and really had no idea of what was to come as the draft began last Thursday.

The Cardinals reached out to Bauman on the final day of the draft. They expressed to him that they had only one pick remaining but had a lot of interest in him.

“They knew exactly who I was from the times they came up to NAU and they said they were interested,” he said. “Then after the draft they called my agent and we figured out a deal.”

He is now that much closer to achieving his ultimate dream. Being from Chandler, Bauman has a lot of connections to the Cardinals through various stages of his life which could ultimately make this transition that much smoother.

“Adrian Wilson is actually a family friend so I have known him probably since I was a freshman in high school,” Bauman explained. “Growing up he had already made a name for himself and I really looked up to him especially knowing his work ethic.”

Bauman has also trained at the Fischer Institute in Phoenix since high school which has allowed him to develop relationships with Carson Palmer, Sam Acho, Michael Floyd and more before being signed by the Cardinals.

He knows that the work doesn’t stop here and if anything, it just intensifies. While making the team is the ultimate objective for an un-drafted rookie or for any player this time of year, his sights are past just cracking the depth chart.

“I am just going to come out here and play football,” Bauman stated. “I’ve been doing this since I was six years-old. I’ve known since then that I wanted to play in the NFL and just to make the team, that’s my first step, but I am not just going to sit there trying to be third on the depth chart. I am going for that number one spot. I always try to be number one in everything that I do.”

“These are the plans I envisioned for myself,” he added. “I don’t know if I saw it going quite like this, it’s a blessing, it was shocking when it actually happened but I felt it wasn’t too far out of reach that I never thought it would happen.”

The drive toward a dream begins for Bauman starting on May 20th for the first day of voluntary organized team activities with veterans and rookies.