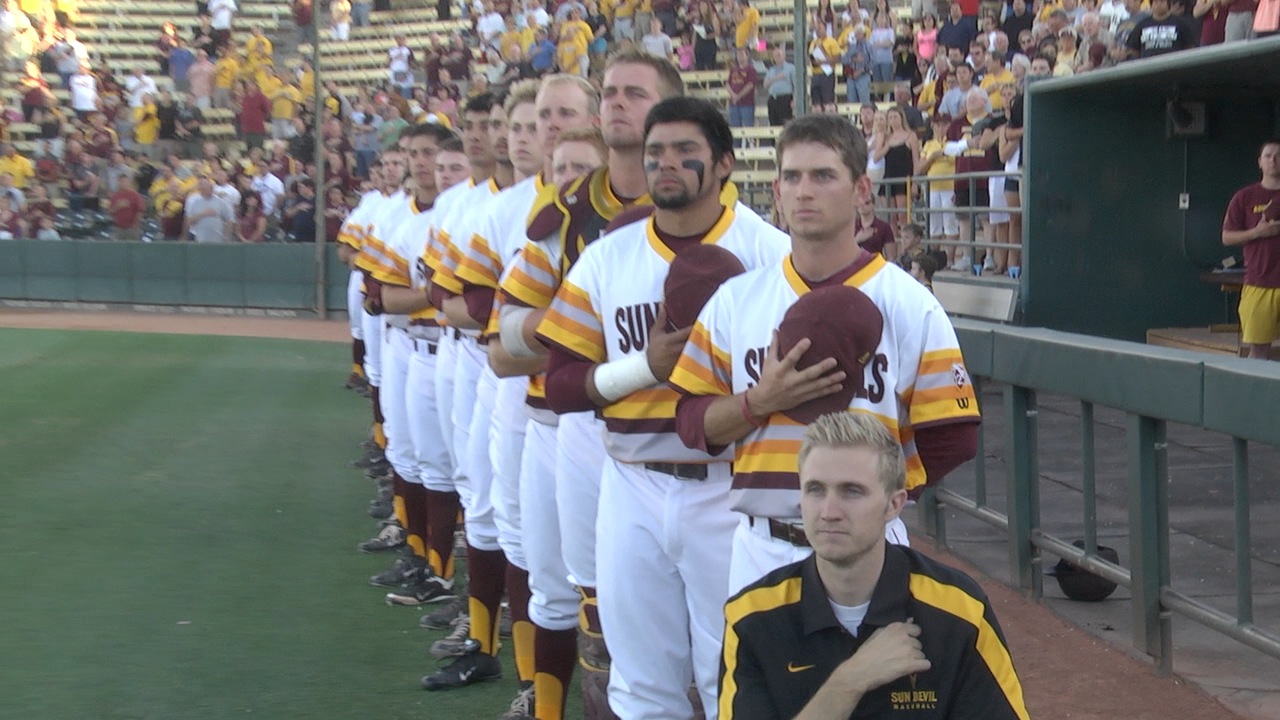 Flashback to the beginning of May where the Arizona State baseball team arrived in Stillwater, OK for a non-conference series with Oklahoma State. What had been an up-and-down season to that point with some impressive wins but head-scratching losses turned for the worst as The Devils got swept by the Cowboys being out-scored 28-22 in the three games.

After that series, the team did some sole searching. The result, they won nine of 11 to close out the season and land a number two seed in the San Luis Obispo Regional.

“We were pressing a little bit but said that baseball is supposed to be fun,” Sun Devil sophomore starting pitcher Ryan Kellogg said. “We realized that this was going to be the last chance that we have to play with some of these guys who are either going to be drafted or are seniors. So we sat down and said, ‘hey, lets do it for each other.’”

“This team is very close,” mentioned head coach Tim Esmay. “The way that these guys play for each other and it’s a statement that they have done that. When you hit a lull and lose five straight, you start pointing fingers. These guys wouldn’t do that. They had each other’s backs and kept coming back for more and I like the way they compete.”

This group of Sun Devils not only have rallied around one another despite adversity from this season but also from experiences from the last season. ASU didn’t make it out of the regionals last season after falling in the Fullerton regional in 2013. Many key pieces from that team are back and now know what to expect.

“The Fullerton regional last year was really tough,” explained ASU junior shortstop Drew Stankiewicz. “Fullerton was really tough and that atmosphere was pretty crazy. Us having that experience there and now taking it to Cal Poly, I think it is going to be very beneficial for us.”

“This one is not going to be any easier,” added sophomore outfielder Johnny Sewald about the task ahead of them. “Getting our feet wet was the most important thing and I think we know what we need to do to be successful.”

So what is ahead of the Devils? The one seed in the San Luis Obispo Regional is obviously Cal Poly who is coming off a fantastic 45-10 season. The three seed and the opponent in game one for ASU on friday is Pepperdine. The fourth seed is Sacramento State. ASU is the lone at-large bid team as the other three were conference champions in 2014. The winner plays the winner of the Fort Worth Regional, hosted by Texas Christian, for the Super Regional.

Notes you need to know as the Devils enter postseason play:

-ASU is making its 37th NCAA postseason appearance, sixth most in Division I college baseball history,

-ASU moved up to No. 18 in the latest Collegiate Baseball poll, while Cal Poly remained at No. 5 and Pepperdine entered the rankings at No. 25.

-Coach Tim Esmay joins former Sun Devil coaching legend Jim Brock as the only two managers in school history to lead ASU to the postseason in four of their first five seasons in Tempe.

First pitch between the Devils and Pepperdine is Friday at 1pm from San Luis Obispo. If they win, they will play at 6pm Saturday. If they lose, they face elimination at 1pm on Saturday.