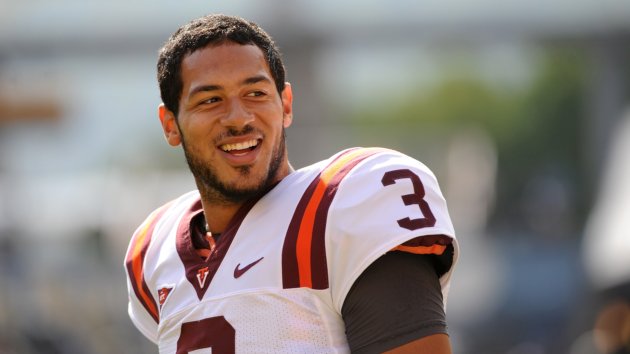 In the NFL it’s not always where you start but where you finish.

It’s what Steve Keim, Bruce Arians and the rest of the Arizona Cardinals front office and staff are banking on regarding former Virginia Tech quarterback Logan Thomas who the Cards selected in the fourth round over the weekend.

The Cards, who had the opportunity to take several other bigger name signal-callers before Thomas, including Johnny Manziel, Teddy Bridgewater and Derek Carr believe the massive 6’6, 248-pound Thomas is the perfect understudy for fellow former Hokie quarterback Arians.

“My opinion of Logan, he’s perfect in every way to be your quarterback,” Frank Beamer told Sports360AZ.com’s Brad Cesmat about his former quarterback who amassed over 9,100 yards and 53 touchdowns during his career in Blacksburg. “He’s a guy that’s going to work.”

The legendary Beamer knows Thomas is far from a finished product, especially with his accuracy throwing to the sidelines but believes with proper coaching and the opportunity to grow into the position, he has a chance to excel as an NFL quarterback.

“This guy we think could develop into that [franchise] type of player,” Keim said to the assembled media over the weekend.

Many draft experts believed Thomas had one of, if not the strongest arms of the 2014 draft class. They were also impressed with his durability and leadership. The Hokies went 26-14 in his 40 career starts.

Logan Thomas to the #Cardinals is an interesting pick within division featuring Kaepernick and Wilson as unconventional QBs.

Beamer believes some of his struggles weren’t totally Thomas’ fault.

“We weren’t as consistent around him as I would have liked for us to have been,” Beamer explained to Cesmat. “The offensive line, we had some new people. Sometimes it’s hard to get into a rhythm. The wide receiver position, we had some change over there.”

Thomas is expected to compete with incumbent Ryan Lindley for the third quarterback position behind starter Carson Palmer and his backup, Drew Stanton.