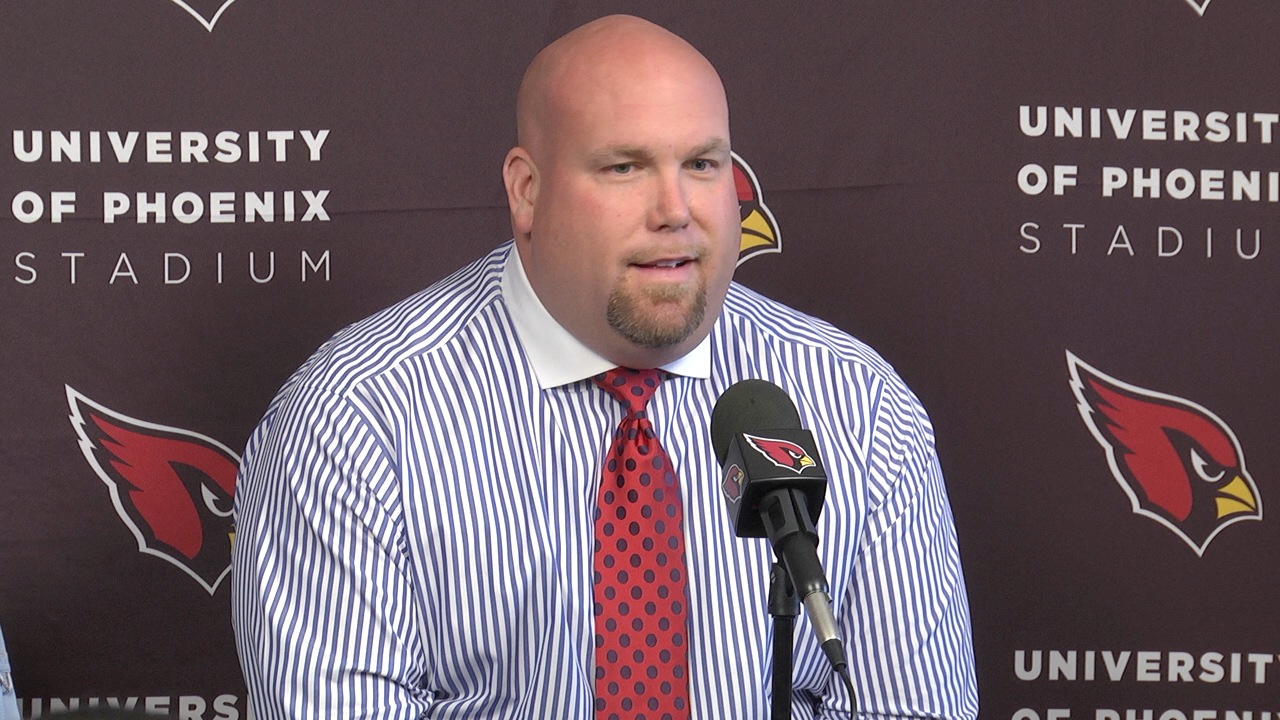 We are just one week away from the NFL Draft and Arizona Cardinals General Manager  Steve Keim and Head Coach Bruce Arians met with the media to talk about it. Here were some of the highlights of the press conference on where the Cardinals mind set is leading up to them selecting 20th overall to get their 2014 Draft off and running.

Steve Keim: Narrowing down all college prospects to their draft board.

“We started this process last May with our college scouts who looked at 13,000 names across college campuses with seniors and draft eligible juniors and widdled that down to about 2,00 draft prospects for us.  We went to the board with about 591 players and just this morning, we finished with 120 players on our draft board. So we will draft off that board of 120 and I can tell you at the top, there are certainly 20 players that we really like.”

Bruce Arians: Attributes they want in the player they draft in first round.

“There are a few scenarios that we have talked about where we would consider moving up with the right circumstance but for the most part, I think our philosophy would be to acquire more picks and move back. We do think it’s deep enough, I do think you can acquire third round picks in the fourth or fifth round and guys who can come in and make an immediate impact for you. So I think when it’s all said and done, you want to acquire more picks.”

“It’s hard to judge the heart and the mind. We can see all the physical tools on tape with their size and their athletic skills, but you cant always judge how much they want it. The passion that Bruce just talked about and whether or not the understand what to do schematically.”

“I think you always have to look at drafting quarterbacks for the future and there are a few quarterbacks that we like in this draft who fit what we do. I’ve said it before and I’ll say it again, whether it’s at 20, 52 or 84, if they’re the best player on our board, we’ll take them.”

Bruce Arians: The first round pick needed to be an impact player.

“The only position you would consider not doing that is at quarterback if you feel he needs to sit for a year. Or if the situation you’re in he is going to be the face of the franchise for 12 years following that year. So if your a building, re-building team or one of those types of teams, you would want to waste that pick on a guy who you think would get 80 to 90 snaps this year for a guy that’s going to hold a clip board. But if you are a good football team, and you feel the face of your franchise is sitting there, I think you would roll the dice on that.”

Steve Keim: Positions being looked at for the draft.

“I don’t think there is a position in this draft that we aren’t going to look at. But right tackle is certainly a position where you have two guys, obviously Bradley (Sowell) did a nice job on the left side last year. We will see how he will transition to the right side. And Bobby Massie is a guy who has all the physical tools, but we’ve talked about it over and over that it’s up to him. He is a guy you hopes develops but only time will tell.”

Steve Keim: Thoughts on Will Sutton and Carl Bradford.

“Will is a very talented guy. More of a 4-3 under tackle. Squatty, explosive and has the ability to be a one-gap player. I think he is the type of guy that needs to fit a certain type of scheme, but he certainly has a lot of value in our league. And Carl Bradford, it’s really the opposite because really his versatility is his strength. He can play inside or outside. He is certainly going to be a good fit on special teams. He plays like his hair on fire so he is the type of guy from a passion stand point that you like.”