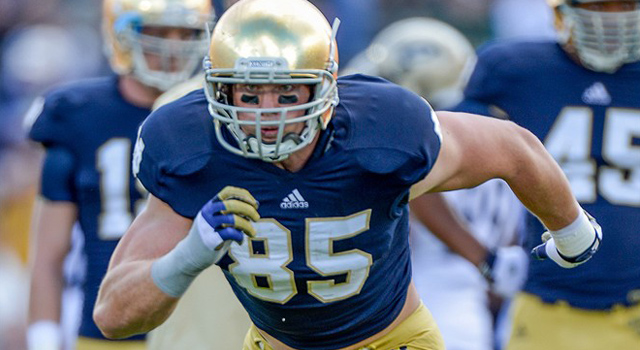 After going defense in the first round, the Arizona Cardinals go defense in the second. They selected Tight End out of Notre Dame, Troy Niklas 52nd overall.

Welcome Troy Niklas to the @AZCardinals and the @NFL. #CardsDraft #NFLDraft #Birdgang #NotreDame

Niklas is the latest of the great tight end tradition from Notre Dame. He stands 6-6, 270 pounds and is coming off a where he was a Mackey Award semi-finalist catching 32 balls for 498 yards and five touchdowns. He is considered the best blocking tight end in the draft.

“He’s a guy in our mind that has just started the scratch the surface of what he can become,” said Cardinals General Manager Steve Keim. “He’s got a tremendous physique, great size, athleticism and the upside is really scary. He’s a guy that is a good player right now and when you see the potential on tape, it excites you.”

That position for the Cardinals had been watched with a close eye over the last year. 2013 was supposed to be the breakout year for Rob Housler but did not wind up being the case. The Cardinals already signed former Viking and Seahawk John Carlson when free agency opened. Carlson, like Niklas, is also part of the great tradition of Notre Dame tight ends. Oddly enough, Niklas mentioned he has met almost all of the great Notre Dame tight ends of recent years that have gone pro but Carlson is not one of them.

Niklas has only played two season’s as a tight end moving over from from defensive end/outside linebacker where he was originally recruited to play. Irish coach Brian Kelly approached Niklas about moving to offense back in the spring of 2012. His response was as long as he will stay on the field, he was open to it.

He was also named the Los Angeles Times Lineman of the Year back in 2010 at Servite High School before he chose Notre Dame over USC for college. He was just a junior and decided to come out early for the draft. Arians thinks he could have been a top ten pick if he decided to stay.

“It was definitely a difficult decision whether to come out or stay,” Niklas mentioned. “But I just had a good feeling and went ahead and came out. It wasn’t an easy thing. That’s for sure. But I am hoping it will pay off.”

When asked when he thinks Niklas will be ready to come in and play, Bruce Arians said “How long does it take to get on an airplane?”

Niklas becomes joins Michael Floyd as the second Notre Dame pass catcher to be drafted by the Cardinals in the last three years.