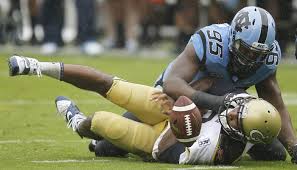 One of the definitely needs that Steve Keim and the Cardinals mentioned they wanted to address prior to the NFL Draft was a pass rusher. The used their first of two third round picks to address that need.

Kareem Martin, a 6-6, 272 pound defensive end/outside linebacker out of the University of North Carolina, had 11.5 sacks last season. He is the second Tar Heel to be selected by the Cardinals in a draft  (Jonathan Copper in 2013) since NC State graduate Steve Keim took over at General Manager.

“We discussed that at the combine,” Martin said. “We’re both willing to look past that for the good of the organization.”

“Kareem Martin is a guy we have targeted from the beginning,” Keim said. “He’s got great size, great athleticism. Reminds us a lot of Jason Jones when he came out of Eastern Michigan. Has the ability to play both inside and out. Can play the five (technique) or outside linebacker for us…We think he is just scratching the surface in terms of his upside as well.”

Martin is a player that prides himself on his versatility. He was a true defensive end in a 4-2-5 defensive scheme at North Carolina but believes he can line up at outside linebacker as well. At the NFL Combine back in February, he had a 10′-9″ broad jump which was the best among defensive linemen and second among all linebackers behind eventual Steelers draft pick, Ryan Shazier of Ohio State. His vertical jump of 35.5 inches was also the best among defensive lineman.

“Whether or not they want me to lineup in the five technique or as a linebacker, I feel confident enough that I can compete at either of those two positions,” Martin explained.

2013 in Chapel Hill was special for Martin. He was an All-ACC First Team selection after recording 11.5 sacks which ranks fourth on UNC’s all-time season record list. He also had a career-high 82 tackles and three forced fumbles (recovered two). In a game against Pitt in 2013, he recorded 3.5 sacks in the game which was just a half a sack short of the school record of four in a game set by all-pro Julius Peppers back in 2001.

A lot of that success could have stemmed from going head to head with Jonathan Cooper during his junior season while teammates together at UNC.

“Cooper is a great offensive lineman,” Martin mentioned. “I got the better of him a couple times but he’s so technically sound and hard to beat on a consistent basis everyday.”

Soon after with the 91st overall pick, one they received when they traded back in the first round with the Saints, the Cardinals selected wide receiver John Brown from Pittsburg State.

“We had to keep you guys on your toes with a small school guy from Pitt State,” Keim joked.

Brown a lesser known receiver was not completely sure if he would be selected on the second day but he did still have family over with him at his house. He received the call from the Cardinals but kept it to himself so that they could then see the announcement of the draft pick on the TV for themselves.

“Everybody just went to screaming and everything like that,” Brown said. “It was crazy.”

Brown ran the second-fastest forty yard dash time at the NFL Combine for wide receivers behind Oregon State Brandin Cooks with a 4.34 second dash. That was the third fastest overall. Bruce Arians has been well documented in what he likes in his receivers. Fast and explosive. Keim said he believes Brown fits the Arians mold having coached smaller but fast players like Antonio Brown with the Steelers and T.Y. Hilton with the Colts.

“He fits the mold that B.A. was looking for that he’s talked about since the day he got here,” Keim stated. “Fast, explosive, T.Y. Hilton type of player. A guy who can take the top off the defense, has duel return in the punt and kick return game and he has been phenomenal since the season was over…He brings that element of speed with he and Teddy Ginn on our offense that we were looking for.”

“Those are the type of guys I look up too and the guys I compared myself too when I was getting ready for the NFL,” Brown explained. “I feel like I can do the things that those guys did.”

“@RIPJWALK5: Officially an Arizona Cardinal” welcome to the @AZCardinals!!

Brown never knew for sure if he would get drafted or even wind up on a NFL roster. He played for a small school in Kansas and had an off the field situation which forced him to take a year off from football. But in the end, his talent was no secret for NFL scouts.

“If people really want you, they’ll find you,” Brown stated. “I found that out today.”

On thing that stands out about both the picks the Cardinals made in the third round which was also the case for Deone Bucannon who they selected in the first. They were all team captains last year. Arians believes that is something you can tell a lot about in a football player.

“It talks about the character of the player,” Arians stated. “Any time you put a ‘C’ on the chest in college, the respect from the players and coaches is there. That says a lot. That’s volumes for me as far as football character.”