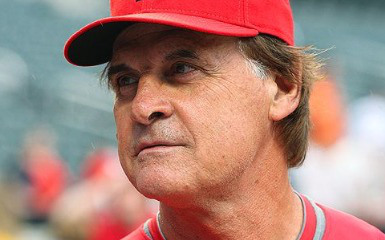 For weeks now, many wondered what changes were going to be made as a result of the dismal start to the 2014 season for the Arizona Diamondbacks. The organization ultimately decided to add instead of subtract and announced on Saturday the hire of future Hall of Famer Tony La Russa as the team’s Chief Baseball Officer overseeing the entire Baseball Operations department.

“Obviously a very important day for the diamondbacks,” D-Backs Managing General Partner Ken Kendrick said on Saturday. “He is really a man that needs no introduction in the game of baseball…We think we have the right guy at the right time.”

“This is about improving and we obviously want to improve on the field and this is a big first step,” mentioned Diamondbacks President and CEO Derrick Hall. “When we began to look our situation closely and decide on what direction to go, we really wanted to create a position above those who we already had and looking for someone like Tony La Russa. We were certainly convinced when we realized that he wanted to be a part of this as well.”

La Russa had spent the last two and a half years working for Major League Baseball and had quietly had a big say in the development of the league’s new replay system. Based on La Russa’s feelings, he always knew the desire to get back into the game from an organizational stand point was something he still desired. This was an opportunity in his eyes to do just that.

“I woke up this morning for the first time since the day the retirement was announced and I felt the difference,” La Russa stated. “That’s how I grew up…I wanted to get back into the action. I miss the winning and losing and always enjoyed the competition.”

La Russa’s knowledge of baseball from a managerial stand point goes back 33 years. That stage of his life began in 1979 with the White Sox when he was hired by then-General Manager Roland Hemond, who currently serves as D-backs Special Assistant to the President & CEO.

This is now a new role for La Russa as well as for the Diamondbacks as they have created this position just for him. With this being new across the board for the team, Derrick Hall explained how the roles now for both La Russa as well as the current General Manager, Kevin Towers.

“The General Manager is going to have more of the day-to-day communication with the baseball operations staff, with scouts, with clubhouse staff, trainers, etc.,” Hall explained. “Tony going to have a much more higher level, a higher look philosophically throughout the organization. And personnel moves that are made, he will have the final say. Hey will give the yay or nay and provide some direction as well once he decides what our needs are.”

“You include everyone on the process,” La Russa added. “But the advantage that we hope to have on the competitive side is that everyone is working under the same thought and philosophy.”

While this addition will not change the record or play on the field for the team over night, it is a move that Kendrick, Hall and the organization believe the team needed to make because above all, change was eminent.

“We did a lot of work over the last month Derrick and I,” Kendrick said. “Meeting with Tony and people who have worked with Tony over the years, it was described by various significant figures in our baseball community as ‘the smartest baseball guy I know,’ ‘the hardest working guy that I have ever been around,’ and ‘frankly the most competitive person I have ever competed against.’ Strong attributes for a person to receive and above all, he is a man of impeccable integrity.”

“This is something Ken and I discussed as our results were not improving and it was after conversations that I had had with Kevin (Towers) and Kirk (Gibson) as well,” mentioned Hall. “Something had to change.”

So now hire is official and the introductions have been made. Now is the time to get to work and La Russa plans to hit the ground running by getting him self acclimated with Towers, Gibson as well as the team before they head back out of town after this weekend to face a familiar foe of La Russa’s, the St. Louis Cardinals.

“You’re in the middle of the first half of the season, there are no spring training workouts, you are going to try and observe, you are going to rely on the people who know this organization so that you can evaluate,” stated La Russa. “Especially the minor leagues. You’ve got an important draft coming up with some big opportunities. Really trying to understand what we have.”

“If you care enough, you figure out how to get from A to B,” he added. “A is figuring out how you take your education of many years and how you spread it throughout the organization.”