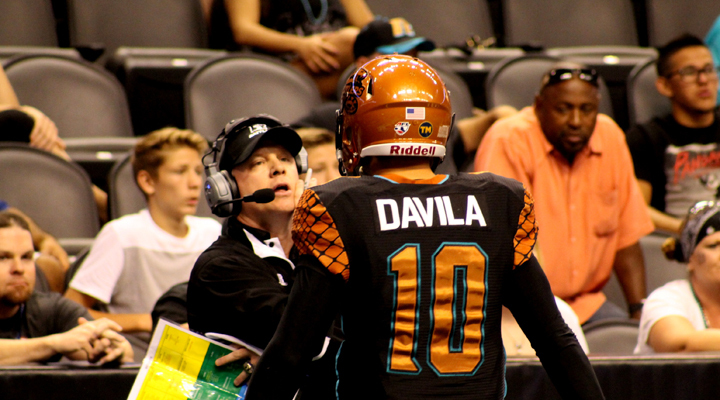 Arizona Rattlers Head Coach Kevin Guy woke up last Saturday morning and began his Game Day routine like any other on the road in Portland. He had breakfast, read the paper, showered and shaved to get his day started.

However, while getting himself cleaned up and ready for the day, he began to feel more and more pressure in his stomach.

“It felt like I was having a baby,” Guy said.

As time progressed, that pain then went to his back and then to his chest. It was then that Guy realized that something serious was happening and initially thought he was having a heart attack.

“When I thought it was a heart attack, I started to think, is this it?” Guy mentioned but then joked, “I was put on this earth to lead and to give people pain and I don’t think my work is done.”

So he decided to head to urgent care and was accompanied by team President, Joe Windham. The urgent care ran various tests and realized that is was his gallbladder.

“The nurse told me that the symptoms for a gallstone are similar to those of a heart attack,” Guy explained.

Urgent care then urged Guy to go the the emergency room where he proceeded to spend the next five or six hours. They ran an ultrasound, an E.K.G and plugged him into an IV. Doctors said they wanted to do surgery to remove the gall but Guy wasn’t having any of that.

Meanwhile, there was a game to be played as the Rattlers were to face the Portland Thunder that evening. He was finally released from the ER about 30 minutes prior to kick-off and then arrived at the Arena 15 minutes before.

“I was able to be there on-time to give the pre-game speech,” Guy said.

Guy calls the plays for the Rattlers and right before the game started, he pulled his quarterback, Nick Davila, aside and told him to bare with him because he was “still a little loopy,” from the pain medication.

The loopiness didn’t last long as the Rattlers proceeded to jump all over the Thunder from the start, opening a big lead and never looked back. They improved to 8-0 on the season, adding to the best start in franchisee history.

After the game, it is often that fans yell out for players and coaches to throw out equipment into the stands. One fan in particular saw that Guy still had his hospital bracelet on after the game was over and asked if he could have it. Guy said it was definitely a first for him.

The Rattlers Coach and GM has received a second opinion and learned from another doctor that there is a three month window to which he should have his gallbladder removed. He has decided to put that on hold.

“We are going to monitor it for now” Guy explained. “They want to have surgery but I do not want to have to in the middle of the season as long as the symptoms don’t come back.”

Guy has continued to work through all of this and will be back on the sidelines this Sunday as the Rattlers look to make it 9-0 as the Spokane Shock come into town.