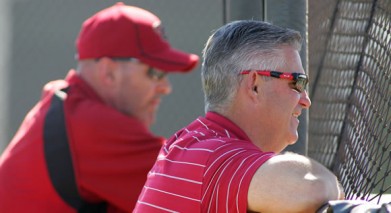 The only positive for the Arizona Diamondbacks in the month of April was the fact that it ended Wednesday.

19 losses and just nine wins made life miserable for everyone in the organization last month but few took it as hard as President and CEO Derrick Hall.

“I tore that month right off the calendar and burned it,” Hall told Sports360AZ.com in a phone interview Friday morning. “Good that it’s behind us. Good that we’re in May. It was just an awful month of baseball.”

Always outspoken and honest, Hall says it’s been a collection of problems which has led to the worst record in baseball, including an unthinkable 3-15 home record. One of the biggest issues has been starting pitching but the staff has improved over the past week.

Fans and people inside baseball circles have wondered when the ax will fall on manager Kirk Gibson or Kevin Towers, both who were given unspecified contract extensions in early February. Arizona was 9.5 games out of first-place in the National League West entering Friday night’s game against the Padres.

“You have to be very careful in situations like this not to be knee-jerk and we have in the past,” Hall explained regarding the duo. “We have been very knee-jerk in the past and I would even admit there’s been times in the past where we’ve let managers go too soon.”

Hall warned Gibson and Towers are not alone in their duties. Both have coaches, scouts and staff members in the organization who they’ve brought to the Dbacks from other franchises. Add to the fact the amateur baseball draft is next month and you understand why the timing for wholesale change isn’t ideal.

“You’ve got to be careful to not be too disruptive in this time,” Hall said. “You have to take time assessing the situation, looking under the hood realizing that others have been impacted, as well and you have to be careful not to disrupt everything.”

The team is off on a three-city, nine-game road trip before returning to Chase Field for a six-game home stand starting May 12th against new manager Matt Williams and the Washington Nationals.

Hall doesn’t believe the Dbacks are done yet.