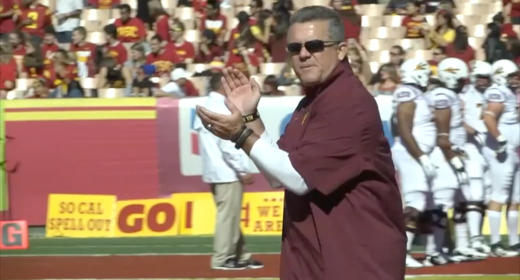 Although Todd Graham and his staff didn’t recruit nearly all the Arizona State players who will land in NFL camps later this summer, they did have a major impact on putting them in position for success at the next level.

Defensive standouts Will Sutton and Carl Bradford are locks to be selected this weekend, while many believe running back Marion Grice will also hear his name called at some point.

The ASU head coach speaks like a proud father of how respected and well-received his Sun Devils were by NFL representatives in the weeks leading up to the draft.

“I think when they start interviewing our players there’s been a lot of positive feedback from the league,” Graham told Sports360AZ.com’s Brad Cesmat in a phone interview Thursday morning. “Our guys are smart and disciplined and the character they show [is impressive].”

Graham says he speaks directly with the scouts and coaches and has formed trusted relationships with New England Patriots head coach Bill Belichick, Oakland’s Dennis Allen and others. He believes the pre-draft one-on-one conversations help put the personnel staffers at ease being honest about ASU player’s strengths and weaknesses.

He says the Devils could have close to a half dozen players drafted and up to 10 total land on NFL rosters by the time training camps open later this summer.

Also good luck to all my teammates and friends in the draft this year. I wish everyone nothing but success ! We’ve worked wayyyyyy to hard !