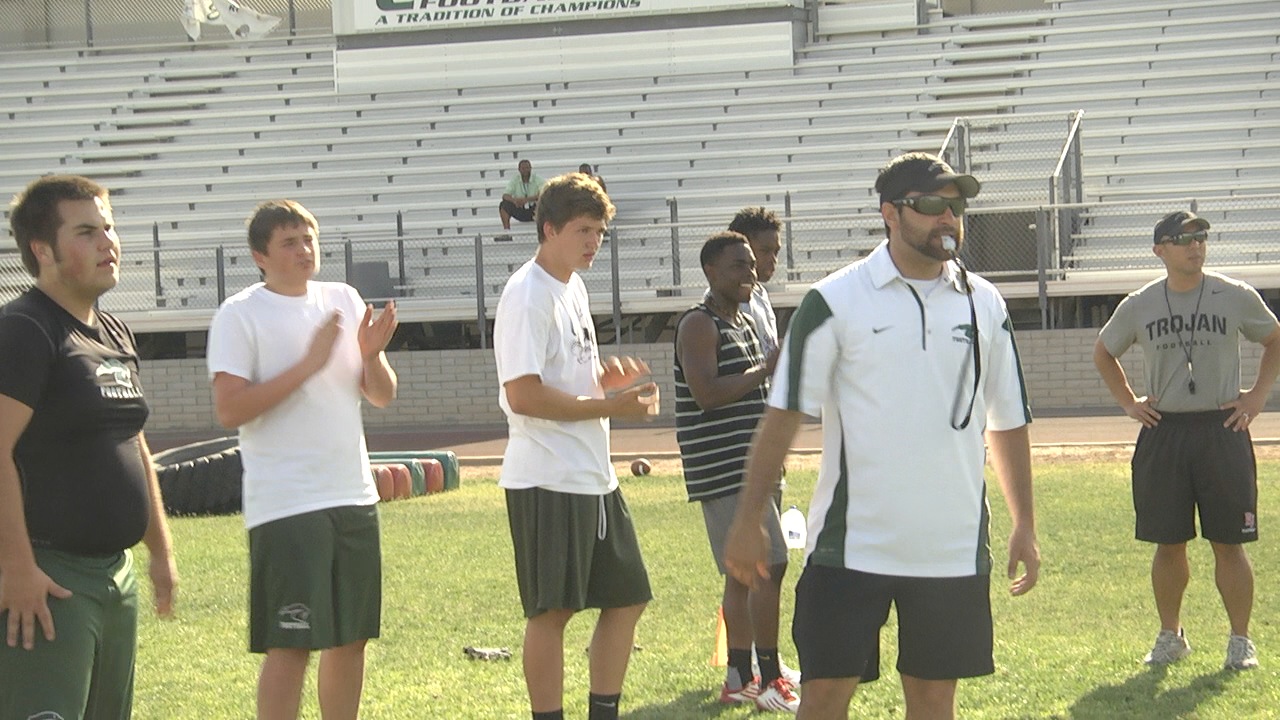 It is hard to find many involved in the Soccer community in Phoenix that do not know the Demos name. Harry Demos, the current Sandra Day O’Connor Head Soccer Coach, both played and has coached for years and years in Arizona.

That stemmed down to his sons as well as it was soccer all day, every day if you grew up in the Demos household. When out competing for the Soreno Soccer Club or playing for fun at recess at North Ranch Elementary, there were always other kids chasing around one of the Demos boys as they were dribbling a soccer ball.

Youngest son, Stefan Demos, thought soccer was going to be in his future all the way up until high school at Horizon where he tried kicking on the football team for the first time. That ultimately led to a new found love and potential success that a young Stefan might not have ever pictured.

“I never really thought of myself as a football player,” said Demos. “More like a soccer guy coming from a soccer family.”

But during his time at Horizon, he found himself not only to be a football player, but a heralded one at that. By the time Stefan’s senior year came around in 2005-06, he was considered the top kicking prospect in the state and ultimately earned a scholarship to play in the Big Ten for Northwestern University where he played for four years.

During his time at Northwestern and then after as a kicker in the Arena Football league he realized how this game would impact his life after his playing days were over.

“There is only so much kicking you can do in a practice,” Demos explained. “I would watch, learn the offense, learn the defensive, looked at personnel and why coaches make the decisions they make. I have really been training for this for a long time, long before I even knew that I wanted to be a coach.”

Right out of college, he joined the Horizon High School coaching staff. He later joined the Arena League’s San Antonio Talons but continued his drive to coach taking an assistant coaching job in Plano, Texas. Not long after a coaching opportunity in his home town of Phoenix opened up at Phoenix Christian and after learning he was to be hired for the position, he announced his retirement as a player and the start of the next stage of his life.

Having played at all levels of competition in the sport. There is one major attribute that Demos is laying as the groundwork for year one with the Cougars.

So many experiences along the way have paved Demos for what he is finally able to do and that is to the lead man for a high school football program. With Spring Football now underway, he is hitting the ground running.

“Right now we are really assessing what we have,” Demos explained. “I watched all of the film from last year. We lost a lot of good players from last year. Some really good talent. But we have a lot of talent coming back. We know what kind of system we want to run, but we have to base our system around our personnel. We are going to work as hard and as fast as we can to come together as a family.”

For Demos’ professional career, the retirement aspect did not last very long. A month ago he received a call from the Orlando Predators of the AFL to come in and kick for a game against the New Orleans VooDoo. Demos thought it was just going to be for one game but afterwards, the VooDoo came to him and offered him a contract for the remainder of the season where he would just have to fly out on weekends of games and not be gone all week.

So now his weekly life consists of Monday through Thursday as head coach of the Cougars and Friday through Sunday, the kicker for the VooDoo. A very busy time in his life.

“I’ll kick myself after practice once these guys are out of here just to keep the leg loose,” Demos mentioned. “But my focus and my commitment is here at Phoenix Christian and they know that. The administration and the athletic department have all been supportive or what I am doing and they think it is pretty cool.”