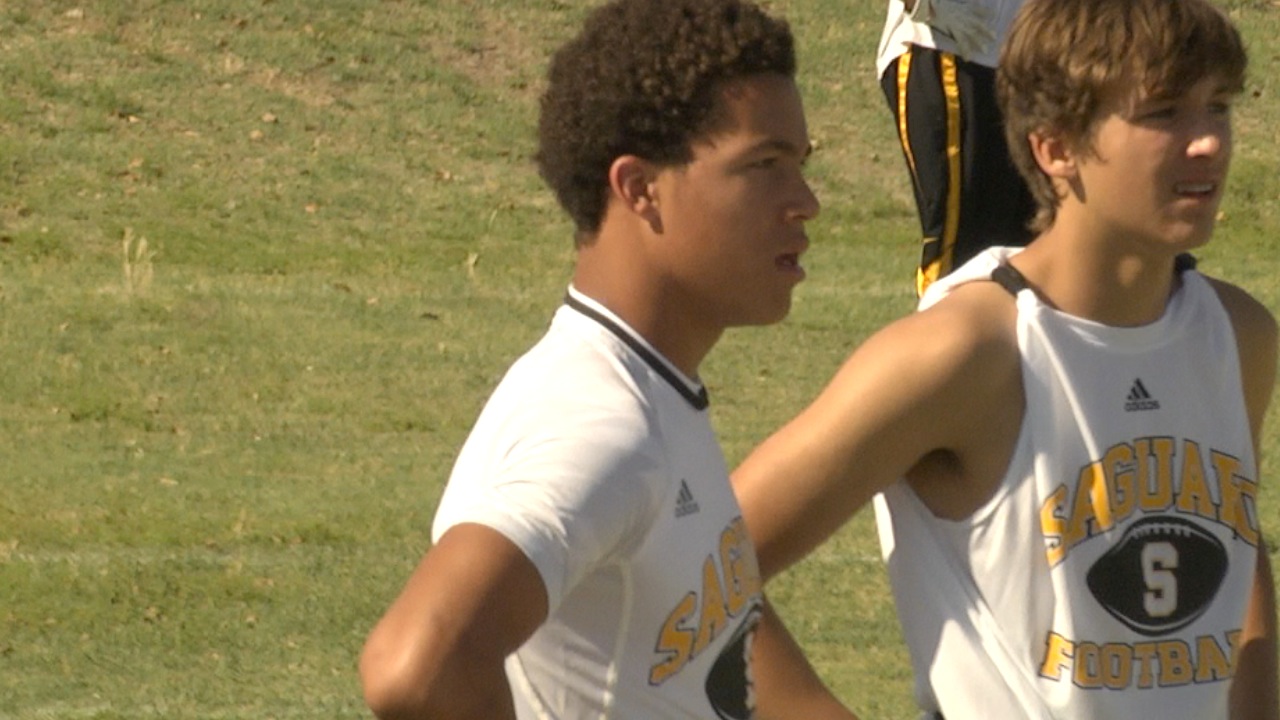 Spring football has come and gone quickly as some wrap up this week and the rest finish up next week. From driving around the valley, here are some of the story’s or players to remember before next fall and the 2014 season arrives.

Mountain Pointe running backs: Head Coach Norris Vaughn will tell you that his offensive line is the strength of his team that has lost 14 starters from a year ago. Another position they find themselves absolutely stacked at is running back. We know about the play making ability of Paul Lucas. He is coming off a great junior season both on the football field and also on the track. He was among the nation’s best in the 100, 200 and 400 meter dashes this season. But he isn’t the only back that the Pride will feature in 2014. Also returning is Brandyn Leonard who got a lot of reps at running back as well as safety last season, especially when Wesley Payne dealt with his elbow injury. He quietly behind Payne and Lucas had 11 touchdowns and just under 700 yards rushing last season. Finally, the Pride have a running back transfer out of Minnesota by the name of Tyrek Cross who looks absolutely fantastic. Vaughn believes all three backs are division I talent.

Saguaro Sleepers: Saguaro’s defense looks stacked. Yes they have the best player in the state in Christian Kirk who will be making plays on both sides of the ball, but there are two others thats the Sabercats will spotlight that expect to be big time players in 2014. The first, 6-2, 215 pound linebacker John Sells had a great spring in the eyes of Coach Mohns. He had 73 total tackles and six sacks as a junior last season and is getting some serious interest from some Mountain West schools. Also a new face at Saguaro transferring over from Marcos de Niza is soon-to-be junior defensive back Byron Murphy. With the Padres last season as a sophomore he had 60 total tackles and three interceptions. Him and Kirk could create one of the best secondary’s in the state.

Liberty’s leading lion: Another defensive back to keep an eye out for is soon-to-be senior Kory Wilson at Liberty. He has been putting in work both at the Lions’ spring practices as well during his off-time working out with Oklahoma-bound and former Desert Mountain star, Mark Andrews with some one-on-ones. Wilson is gaining confidence to his already impressive athleticism and could be one of the top defensive playmakers in 2014. He is coming off a 2013 season where he lead the Lions in interceptions with five.

New Chandler threats: Dionte Sykes, Elijah Sykes and Mitch McCulley all graduated meaning the Chandler Wolves lose a ton of wide receiving talent. That also means new faces have the opportunity to step in. Another notable transfer to make not of this spring is N’Keal Harry who comes from Marcos de Niza and joins the wolves at the wide receiver position. Harry stands 6-4 and 210 pounds and is coming off of a sophomore campaign with the Padres where he lead the team with over 700 yards receiving. He has a similar build of Dionte Sykes and looks to play the same role for Chandler. It will also be the first opportunity we have to see the youngest Taylor bother in action. Kerry Taylor’s younger brother Kolby is only a freshman now but expects to be on the varsity level as a sophomore. He has already received an offer from ASU.

A Yuma Star: I asked my friend and colleague Jason Jewell about two months ago to give the names of a few players who will be household names by the end of next fall. One of those names was Yuma Catholic tight end Matt Pistone. Little did I know that he would be a household name before the end of spring ball. Pistone has absolutely blown up from a recruitment stand point this spring adding around 10 division I offers. I compare the skill set of Pistone to Trent Moore who recently graduated to Hamilton and is heading to Oregon State. Moore was a tight end that moved to the offensive line his senior season. Pistone as of now is a tight end but has the size and athleticism to which college schools may look at him as an offensive tackle maybe somewhere down the line. For now however, he is one of the top tight ends in Arizona at any level for a Yuma Catholic team looking to repeat as state champions in 2014.

Bulldog of a running back: Queen Creek’s Weston Barlow didn’t participate in spring practice this year full time because he was too busy winning the state championship in the 100 meters for division II. He set school records in the event and broke it once again in the prelims for the state track meet. Barlow is coming off a great junior season where he bursted onto the scene. What stood out to me was how he has completely transformed his body since last season ended. He is absolutely ripped and happens to be one of the fastest guys in the state as well. He is going to be an even tougher guy to bring down in 2014 than he was last season.

These are just a few of the notes I have compiled over the last three weeks of spring practices. There is more on my radar and more I expect to keep an eye out for one passing league begins. So stay tuned!