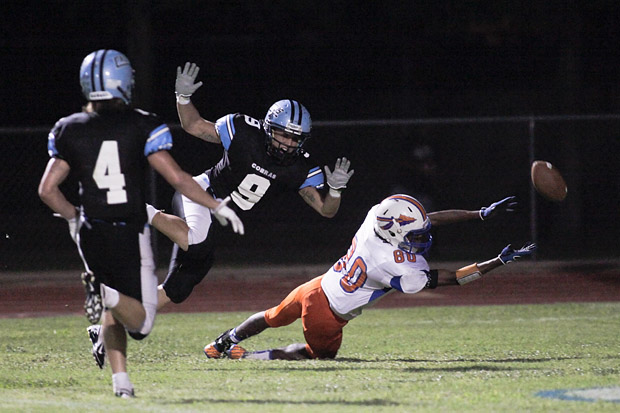 We are just getting started in high school football passing league tournaments for the summer and there have already been some very good story lines with some new names involved.

Next man up: Antonio Hinojosa did an incredible job over the last two seasons under center for the Mountain Pointe Pride. Now that he has graduated, who is the next man up? A young man by the name of Garvin Alston. We did not see Garvin during spring practice because he was in the midst of a playoff run with the Mountain Pointe baseball team. But he took the field with the Pride at the ASU Passing League Tournament last week and looked very good. He appeared in seven games last season as the back-up and went 6-9 for 82 yards and one touchdown with no interceptions. The soon-to-be senior could be a rising star at the quarterback position in the state.

Meet the Murphy’s: I already talked about Byron Murphy’s transfer from Marcos de Niza to Saguaro a month back in my ‘What we learned from AZ HS spring football 2014‘ notes column and how much of an impact he will look to make for the Sabercats in his upcoming junior season. Well playing in front of Todd Graham at the ASU Passing league tournament, clearly they think he will make an impact as well. According to my guy Jason Jewell, ASU went up Murphy after the 7-on-7 games last week and informed him that he has an offer from ASU.

Another Murphy in the news is Brophy’s big junior defense end, Connor Murphy. This Murphy family has had an exciting month as older brother Trent Murphy was selected in the second round by the Washington Redskins. Fast forward to this past week and Connor Murphy received an offer from his older bro’s alma matter, Stanford as his first scholarship offer. Connor going into his junior year is already 6-7, 235 pounds.

Year of the defensive back: We have already talked about Saguaro’s Byron Murphy and we also know his teammate at Saguaro very well, Christian Kirk. But This 2015 class has great depth at the defensive back position. Players who have stood out from what I have seen in spring ball and in passing league, plus starting to pick up some recruiting attention of late include Austin Williams of Basha (recently offered by Montana and South Dakota State), hard hitting Ryan Parentau (holds offers from Air Force, NAU and South Dakota State) is coming off a big junior season, Brophy’s Isaiah Oliver of Brophy (recently offered by New Mexico), Cules Rose of Pinnacle (just picked up first offer from University of Puget Sound) and Tucson High’s Demetrius Flannigan who just this weekend, received his first offer from Arizona. This is just to name a few and it is a very deep and talented position in this state.

Pinnacle Connection: Pinnacle quarterback Brian Lewerke lost two of his top targets from the 2013 season in Dan Galindo (who is now up at NAU) and Mason Hatton. Cules Rose returns but now the Pioneers will have a big boost to their receiving core coming their way as wide receiver Adam Turner has transferred from Thunderbird to Pinnacle. It is a big get for an offense that has big shoes to fill from a departed senior class from 2013. Turner had a great junior season catching 65 passes for 1,233 yards and 16 touchdowns. He currently holds one division one offer from Washington. Another Pinnacle player who looks to step up big on the opposite side of the ball is linebacker Justin Mandrola. He had 39 total tackles as a sophomore at the varsity level last season and has really transformed his body going into his junior year. Coach Zupke expects big things from him this fall.