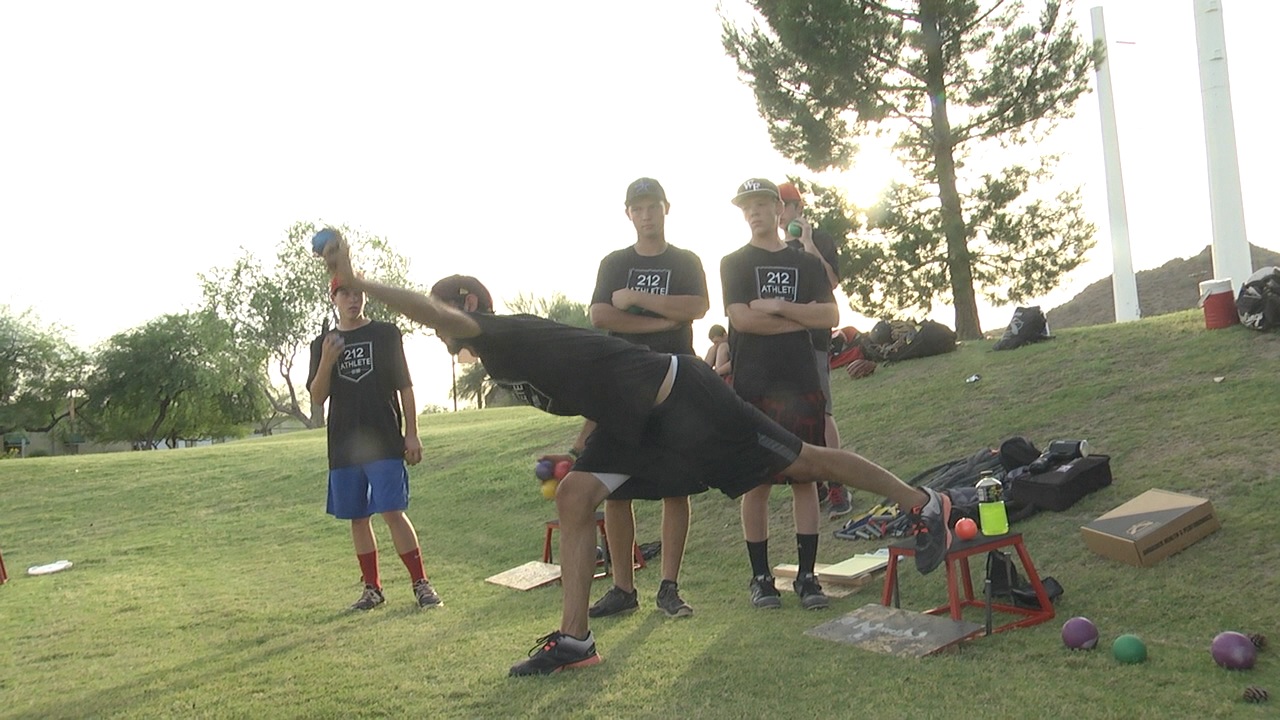 It was said that the biggest issue that was raised recently at Major League Baseball’s owners meetings was the number of great young players having to have Tommy John Surgery after tearing their Ulnar Collateral Ligament in their elbows. We have seen that locally with Diamondbacks ace Patrick Corbin as well as with some of the games most promising pitchers like Jose Fernandez of the Marlins and Kris Medlin of the Braves just to name a few.

Here in Arizona, there is a pitching instructor that is teaching philosophy that could prevent this injury and others that are similar in the future.

Adrian Gomez, a former University of Washington and Arizona State pitcher, is developing the 212 Athlete. The Philosophy behind his teaching has a few main factors. The first is developing strength through physical therapy-esk workouts that could prevent injuries going forward.

“When you go out to throw as a starting pitcher, you have to train like a marathon runner,” Gomez explains. “You can’t just go out there and run 26 miles and say hey! Not without feeling very sore and not being able to walk as a result. What we do is we gradually increase intensity while increasing velocity.”

Gomez does so by stressing the importance of endurance, flexibility and strength not just in your arms, but also your shoulders and lats. His students do a lot of work with medicine and weighted balls as well as resistance bands.

The most important place Gomez stresses the flexibility brings the next major factor of his philosophy. Throwing from your hips and other major muscles in the body and not just your arm.

“We are allowing our bodies to work and have our hips be the key force in supplying all of the power we need to throw the ball,” Gomez said.

This then spurs on the next major philosophy which is diving off of the mound by using your hips and legs. A lot of pitchers today, especially the big power arms, are using a method of stepping short and throwing hard. Gomez’s style uses the arm as basically used as a carrying device for the ball and the body is what provides all of the velocity.

“You’re using all of the big muscles in your body and taking the pressure off of the elbow and off of the rotator cuff,” Gomez mentions. “And be able to throw hard and have it be easy for you.”

This philosophy stems from the current ASU pitching coach and former coach of Gomez’s at Washington, Ken Knutson, who instils this every day on his pitchers. It has also been utilized by San Francisco Giants pitcher Tim Lincecum, who was a teammate of Gomez’s while at Washington, as well as former Diamondbacks number one overall pick, Trevor Bauer. Both have been looked at as being a freak or as unconventional but both have had a lot of success coming up the ranks and neither have face arm problems.

“I started reaching that stuff and started researching it myself and found that that is the best way to go about pitching,” said Gomez. “They could go long innings, they could go back-to-back complete games.”

One local high school pitcher has been with Gomez now for nine months and is seeing the results first hand.

“It has been a big impact on me in the last nine or so months I’ve been doing this,” said Arcadia High School pitcher Max Woods. “I’ve increased about 15 miles-per-hour on my fastball and ever since I’ve been doing this, when I pitch, my arm feels a lot better than it did before. And afterwards, I am not sore.”

The 212 Athlete is small and slowly growing but Adrian Gomez is really onto something that could take the game and it’s youth by storm.

“I would like to be the number one source in Arizona to develop arms young and to be able to create the best arms that Arizona has ever seen,” Gomez states. “And safe arms.”