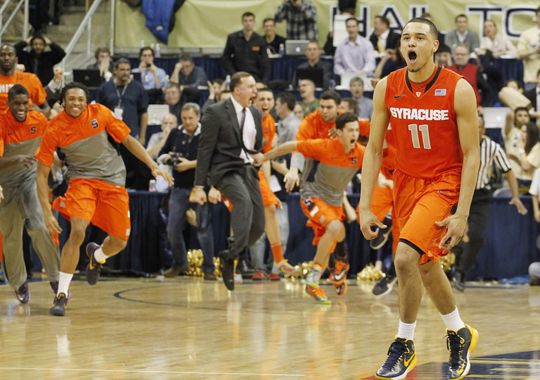 To think a year ago at this time, Tyler Ennis was an 18 year old high school graduate out of St. Benedict’s Prep (originally from outside Toronto, Canada) and a heralded point guard prospect heading into his freshman year at Syracuse.

Fast forward to Friday, June 27th, the day after the NBA Draft, and what an incredible year it has been.

Since last summer, Ennis earned the starting point guard spot from Jim Boeheim, became the leader of the Orange during a run that saw them win 25 games in a row to start the season which included an incredible game winning shot at Pittsburgh a step inside the half court line. He was named to the ACC All-Freshman team and second team all conference and on June 26th, was selected 18th overall in the first round by the Phoenix Suns.

“It’s still pretty surreal,” Ennis said. “Even being drafted last night, I try to live in the moment as much as possible. I am just kind of realizing my success at Syracuse and looking back at wht we did and realizing how good of a season we had. I don’t know how long this will take to sink in but I know that I am more than excited to be here.”

Now the Suns drafting Ennis in the first round feels all too familiar for the people of Phoenix. It seems like a long time ago that the Suns, who had all-star point guard Jason Kidd on the roster, spent their first round pick on a Canadian point guard by the name of Steve Nash. Many questioned it and some actually booed. But the Suns were clearly onto something when they made their decision that night.

When the Suns were on the clock with the 18th pick, many thought they would go with a shooting guard or wing player on the board. Instead, they selected a Canadian Point Guard despite having two already on their roster. One of which was just named the NBA’s Most Improved Player. So could history repeat itself and could the Suns be onto something?

“I would certainly hope so,” Ennis mentioned. “I think anybody would be lucky enough to duplicate Nash’s career. Definitely going to have to work for a spot. Definitely something that I am going to have to do. But Coach (Jeff Hornacek) is able to play two point guards, Coach likes to be able to get up and down. And I think me being a play maker myself, I’ll be able to come in and compete.”

So for the Suns fans that may not have had Ennis on their radar, he mentions that there is more to him that they will get to know in a hurry.

“I think the off-the-court side,” he explained. “I think being a good locker room guy and teammate, that’s something I think the fans don’t see. I think I have a good relationships with my teammates through my whole life. I think that is something that is important and especially for the type of family atmosphere that people say the Suns have.”