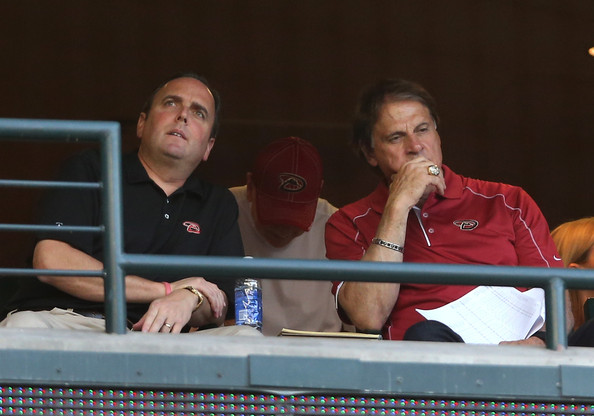 In the dead of summer under the watchful eye of Chief Baseball Officer Tony La Russa the Arizona Diamondbacks shopping has begun.

A few days later starter Brandon McCarthy was shipped out.

With the Major League Baseball trade and waiver deadline coming up you can expect dealing to continue from an organization who has struggled to find their identity since making the playoffs back in 2011. Contending teams have inquired about infielders Aaron Hill and Martin Prado, as well as catcher Miguel Montero and several others.

There are a few untouchables on the roster, most notably National League all-star starting first baseman Paul Goldschmidt but the question remains how much of a roster overhaul will see when the revised 25-man roster is posted in early September?

Two players who could remain in Arizona are shortstop Chris Owings and lefty starter Wade Miley because of a number of reasons, most notably their youth, production and salary.

“The others who I would say are untouchable are Owings and Miley,” ESPN baseball insider Pedro Gomez told Sports360AZ.com’s Brad Cesmat in a phone interview Tuesday. “A guy like Wade Miley is still very desirable because he’s realistically going to be under $600,000 for next season…Owings is going to be in the $500,000-550,000 range. Those are the numbers the Diamondbacks and all clubs really look for. Before salary arbitration those guys are still untouchable because of the success that they’ve had.”

The verdict is still out on closer Addison Reed who came over this past off-season in a deal from the Chicago White Sox.

“He’s obviously struggled,” Gomez said of Reed. “He’s had some problems with the home run ball all season but he is somebody with a track record as a closer.”

La Russa has a track record of winning and winning big.

It’s something Diamondback fans hopes translate to the desert.