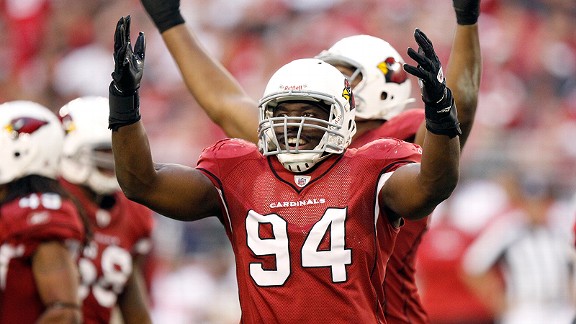 Coming into training camp, players can feel a range of emotions.  They can be eager to start the season, but dreading the tedious weeks of practice and monotony of playing against your teammates.

Not Sam Acho.  He made his feelings very clear about how he feels entering training camp: Joyful.

Acho suffered a broken leg in the Week 3 of the 2013 Arizona Cardinals season against the New Orleans Saints.  This week was one of the first times he was able to be on the field with his teammates since the injury.

“That was my first time being sidelined, having an injury that kept me out for I think any games, really,” Acho said.  “This is the longest I’ve been sidelined and that’s why I am really eager to get back out there.”

The former Texas Longhorn enters his fourth year with the team.  He made an instant impact as a rookie, appearing in all 16 games of 2011.  He then shifted into starting all 16 games as a second year player before seeing his 2013 season cut short.  You won’t catch Acho complaining about the injury or the rehab.  You will, however, hear him use another term often: opportunity.

“I have a new lease on football life right now because it’s just an opportunity to play.  Simple as that.  A lot of guys don’t have that opportunity to play,” Acho said, “It is a game that we love but once you get it taken away from you, you realize how much you really do love it.”

With the departure of Karlos Dansby and suspension of Daryl Washington, Acho has just that, an opportunity, to reinsert himself in the starting lineup and become a staple of the Cardinals defense.  The injury has given him an opportunity to come back hungrier than ever without taking his time on the field for granted.