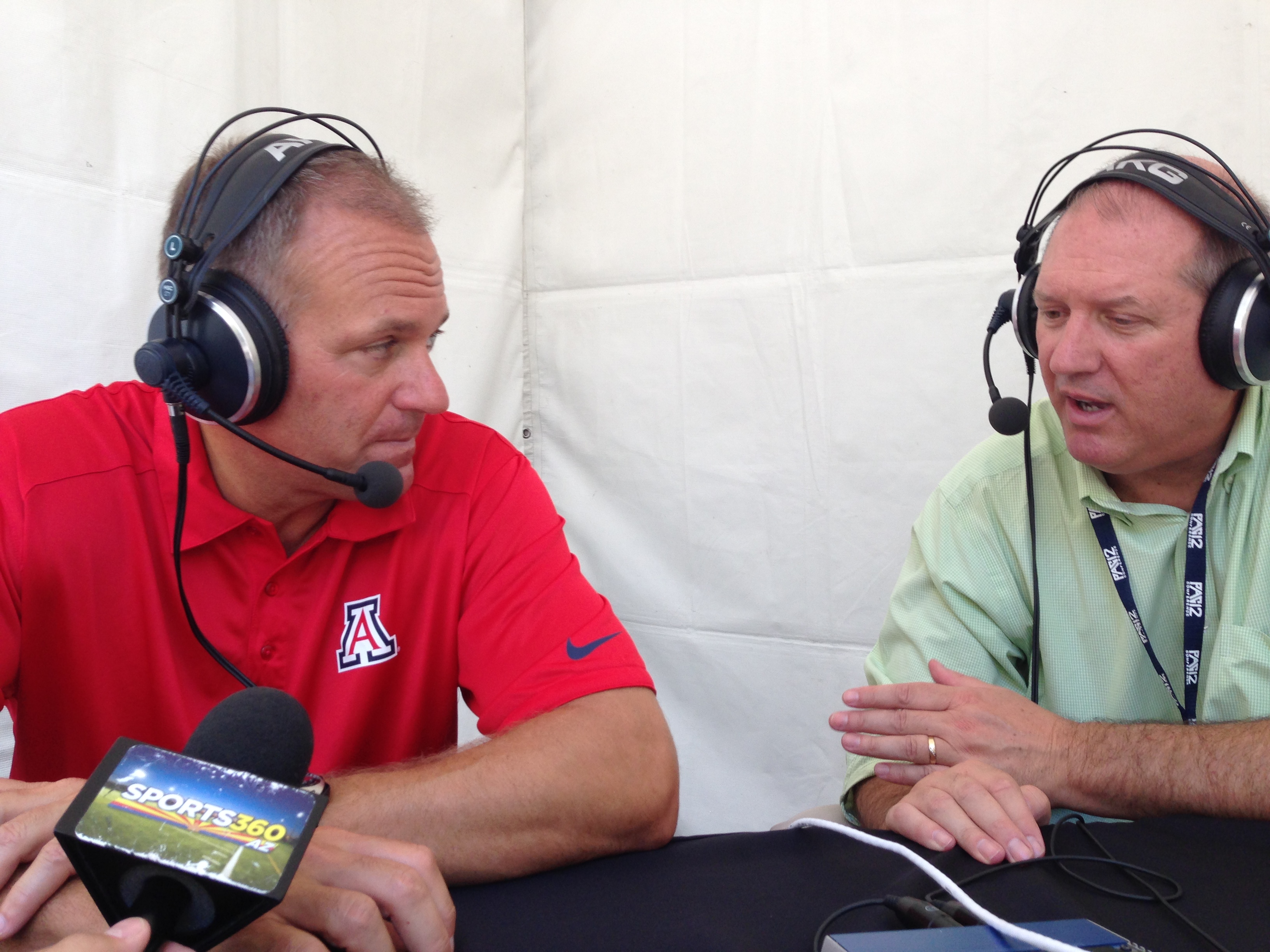 I had the opportunity to sit with Rich Rodriguez over lunch on Wednesday from Pac-12 Football Media Day. Here are some notes of things that were talked about which stood out.

In Rich Rodriguez’s coaching career, every time he has had a quarterback play for him for two seasons, every single time that second season resulted in that quarterback winning the conference player of the year. He has not had that opportunity since taking over at Arizona although he said at pac12 media day on Wednesday that if he had Matt Scott one more year, he believes that trend would have remained the same.

With that understanding in mind and seeing players like Connor Brewer and Anu Solomon in the mix to be the guy for 2014 and beyond, would Rich Rod keep that in the back of his mind when naming his starter? He still states each and every time that he has not made a decision yet and really doesn’t know at this point. But did explain that if he had two quarterbacks who were completely even, he would give the nod to the younger player. But no matter what he will give the job to the guy who is best even if there is barely any separation from a guy with one year left compared to a younger one.

One thing is for certain, there is no shortage of playmakers at wide receiver. Rich Rod said on Wednesday that there are seven to eight, maybe even nine receivers that he would be confident in if the season began tomorrow.

The running back position takes a hit losing Ka’Deem Carey but like the quarterback position, has a ton of replacement options to step in. Because of all the fantastic athletes at receiver don’t be surprised to see one of them, for example Davonté Neal, get a share of carries just to get the ball in their hands.

One of the faces of the 2014 class is Tucson’s own Cameron Denson. He was one of the top prospects in the state of Arizona out of high school and was being recruited as both a receiver and defensive back. Rich Rod mentioned that to at least start his collegiate career, Denson will play defensive back. He explained that with the depth at receiver, playing DB would give him more of an opportunity to play right away. Rodriguez mentioned that when Denson was approached about that, he had a whatever is best for the team approach. Sounds like the way Denson has always been going back to his days at Salpointe where he always in my dealings with him was humble and not one to put a spotlight on himself. Rich Rod mentioned that Denson’s friend and teammate from Salpointe, Kaelin Deboskie, could see some time as a true freshman as well at wide receiver.

I got into a very interesting conversation with the Wildcats coach about recruiting special teams players like kickers and punters. He talked about how hard it is to offer a scholarship to a player like that because you never see kickers in action with 50,000 people watching and a 6-5, 300 pounder running at him. He does mention how important it is to land the right guy though and said that Wildcat fans have unfortunately seen too much about problems with kickers. One kicker going for the starting job in particular is a fascinating story. Redshirt Junior Casey Skowron was at one point the team manager for the U of A women’s soccer team. In 2014, he could go from soccer manager to kicking game winning field goals at Arizona Stadium.

One final note that stood out to me was when Rich Rod was asked about who he sees could be this season’s breakout performers. Last year, freshman receiver Nate Phillips and linebacker Scooby Wright came out of no where to play big roles for the team. On Wednesday, Rodriguez mentioned a few players that could breakout this season but one that was mentioned that stood out to me was former Ironwood Ridge standout and walk-on linebacker Jake Matthews. Jake was a special talent on a Nighthawk team that won a state championship in 2012 without any “top recruiting prospects,” compared to the Centennial team they beat. It was just a great team and Matthews was one of the leaders. Rich Rod thinks Matthews is a hidden gem and could play himself into a scholarship in the very near future.