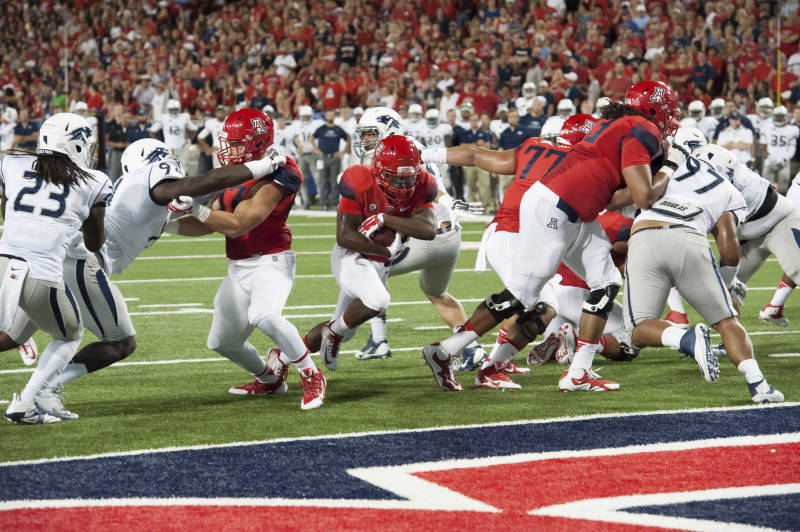 Ka’Deem Carey will go down as one of the best players ever to put on a Wildcats uniform for what he accomplished during his time in Tucson. But who would have thought that Arizona fans after just three games would seemingly have moved on from wishing he came back for his senior season.

Through three games, Wilson has rushed for 452 yards on 66 carries and four touchdowns with an average yards per carry of 6.8. For a running back that has heard nothing but the name Ka’Deem since arriving in Tucson plus the competition for who will be his replacement through the fall, motivation from within has not been hard to come by.

“Nick is a smart football player and has picked it up pretty well,” said Rich Rodriguez at his weekly press conference. “I think the competition we have at running back is keeping everybody on their toes.”

“I have to thank my offensive line,” mentioned Wilson deflecting the praise to be solely on him after Saturday’s win over Nevada. “They helped me so much and I couldn’t have done it without them.”

Wilson has taken it upon himself to be like glue to Arizona running backs coach Calvin Magee. As a result, Wilson mentions he is seeing the game better than he ever has and his play is a good indication of the result of that.

“Coach Magee is doing a really good job guiding me along the way and taking me game‐by‐game,” explained Wilson. “I couldn’t have done it without him. The game has started to slow down a little bit, even though it is still pretty fast paced. I appreciate all the things everyone does for me.”

“He’s been doing what he has been coached to do,” added Rodriguez. “The thing he’s done the best is taking Coach Magee’s instruction and understanding where the blocks are coming from, when he should cut back, and how he should cut back. He’s taking all those things to heart and is learning that quickly as a freshman.”

Rodriguez mentions the ability to block from the running back position as well which is key to winning the heart of your coach at any level of play.

“He’s blocking as well as any freshman that I’ve had as far as understanding that part and understanding protections,” Rodriguez mentioned. “He is really good in pass protection which is usually a harder thing for young guys to figure out.”

Because of Wilson’s play thus far this season, the Wildcats have now extended their streak of 100+ yard rushing games to 25 in-a-row which is the longest streak for the school since joining the Pac-10/12 in 1978. The Wildcats have also now gone four consecutive games with a 100+ yard rusher and receiver.

Wilson is already making his presence felt as a receiver out of the back field as well which is huge in the Rich Rod system. The receiving yards in the win over Nevada last week led him to a career best 186 total yards for the game.

The run game has also been critical in the Wildcats last two wins in particular which have both been close finishes. Having a redshirt freshman quarterback in Anu Solomon still learning the ropes and what it takes to be successful at this level, having the great run game by his side and coming through with wins in close games has done nothing but help him, as well as this team.

“Whenever adversity comes towards us, we just have to bounce back from the mistakes that we make,” Solomon said after the win against Nevada. “We have to execute every play. That will definitely help with conference games. We just have to stay calm, relax and do what we do best.”

Wilson and the Wildcats begin Pac-12 play this Saturday at home against the California Golden Bears.