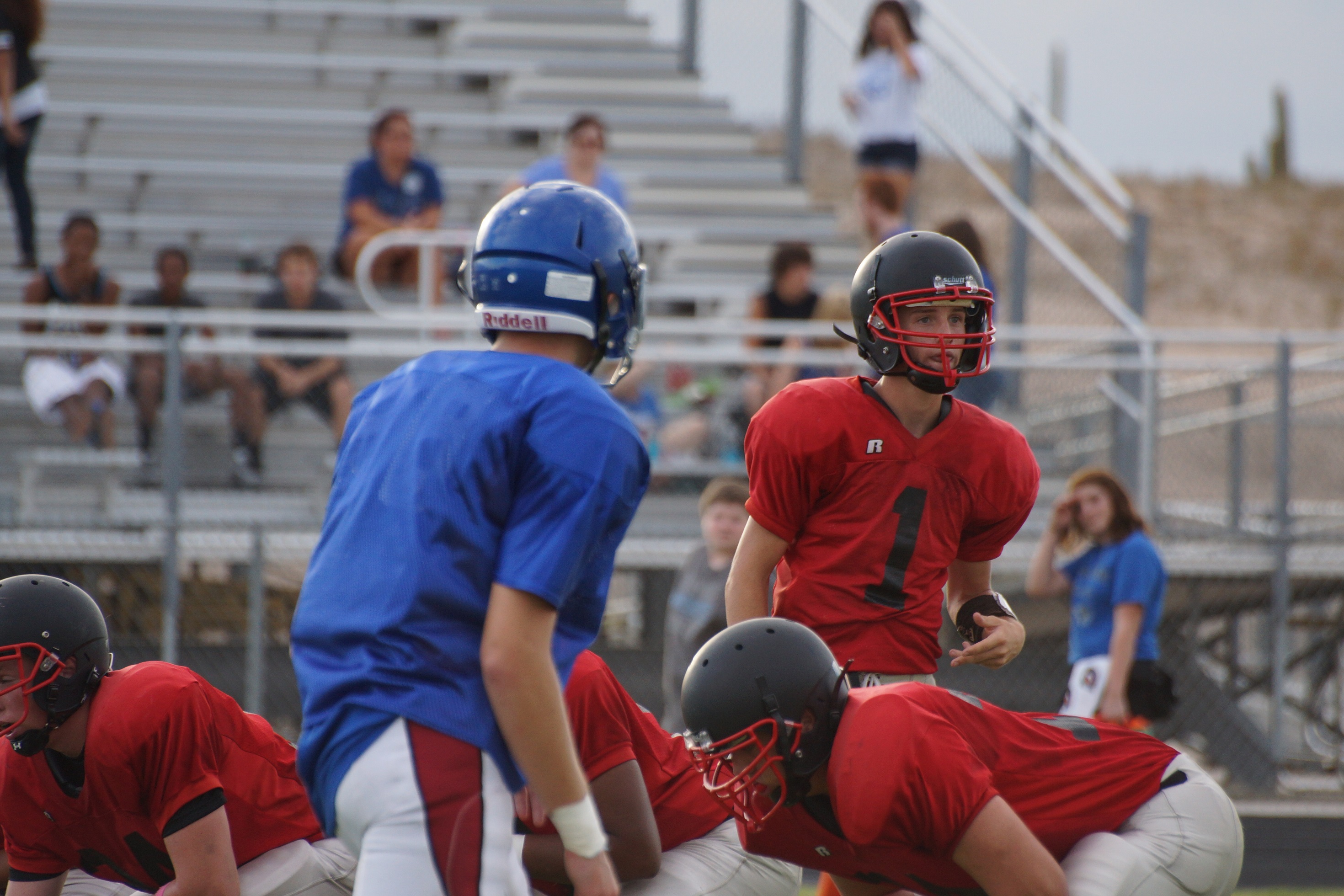 When spring practice started in May, Combs head coach Jesse Hart was looking for one of two players to win the starting quarterback job for the Coyotes. Sophomore Skylar Johnson and junior Ethan Hunt were the two competitors hoping to lock down the job.

As spring practice ended and summer camp approached it remained unclear which player Hart would choose to lead the Coyotes’ offense in 2014. Preseason training camp also came and went without a decision being made.

Before the Coyotes’ scrimmage against San Tan Foothills, just a week before their season opener, Hart hoped to name a starter based on the performances of Johnson and Hunt during the scrimmage. He said afterwards he would review the film with his offensive coaches and finally make a decision that loomed for weeks.

It’s now three weeks into an undefeated season, so far, and both Johnson and Hunt are still sharing playing time at quarterback. Clearly, Hart is a believer of the “if it isn’t broke, don’t fix it” philosophy.

“We say every week we’re going to look at the film and decide,” Hart said after Friday night’s 41 – 14 victory over previously undefeated Wickenburg. “But they both end up playing great in the game so it’s difficult.”

You can’t argue with the success the Coyotes have had so far, so why change. They are off to a 3 – 0 start for the second straight season, but this year’s team has enough speed to compete with Division IV state title contenders like Coolidge and Seton Catholic.

Both players admit they want to be “the guy,” but it’s all about the team first. By all accounts and appearances, they genuinely root for each other to have success.

“They compete every day at practice,” Hart said. “But they’re also each other’s biggest supporters too.”

Johnson credits his platoon partner for his improvement since the spring.

“I’ve been working this whole (year) and I’ve (played) much better,” he said. “I owe it all to Ethan and my coaches. (Ethan) as helped me in general with everything.”

As much as Hart and the players themselves would like for one guy to step up, it appears all parties involved will be satisfied if things remain status quo.

“We’ll keep doing the same thing and we’ll figure it out from there,” Hart said. “Maybe one of these guys will step up and win the job, but if this formula works we’ll take it.”

Friday night’s win over Wickenburg was arguably the Coyotes’ biggest signature win in the school’s history. A win next week at home versus Coolidge would end that argument. In order to beat the Bears next week, the Coyotes will have to play their best game with their best players, including Johnson and Hunt.