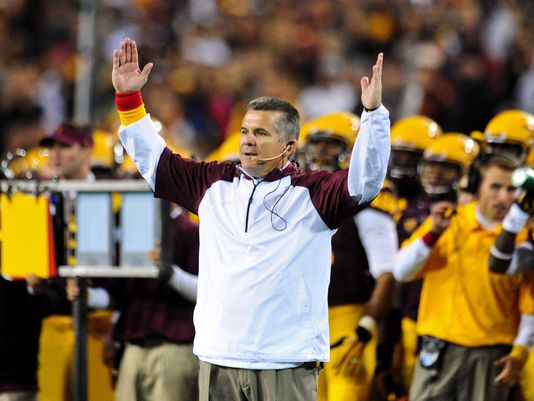 Three years ago the Arizona State football program and their new head coach Todd Graham were both searching for the same thing.

Now just barely two seasons later, coming off a Pac-12 South Championship, ASU’s foundation is as strong as ever and their once-perceived job-jumping head coach doesn’t appear to be going anywhere.

Graham’s no non-sense, no excuses approach and attention to detail taking over a team which had little accountability when he arrived has caused a perfect storm in Tempe. The players have “bought in” to Graham’s “brotherhood” approach from the way the players handle themselves on the field and off.

When the Game Stands Tall is what football is all about…Brotherhood. Team enjoyed it! #StandTall

“You remember all the criticism of Todd Graham when he first got there,” FOX college football analyst Charles Davis explained to Sports360AZ.com’s Brad Cesmat in a recent phone interview. “We’re starting year three…if that talk [of him leaving] is still out there it’s pretty muted. He’s all-in with this group and they’re all-in with him. I know they’re recruiting well. They’ve got players there.”

It’s all been part of the building blocks to success which Graham boldly openly discussed the day he was introduced to take over Dennis Erickson’s mess.

The Devils opened their season with an easy win over Weber State and are expected to remain unbeaten when they face Pac-12 South favorite UCLA on Thursday the 25th at Sun Devil Stadium.

Graham is breaking in a number of new players defensively, including many which hadn’t played a snap for ASU before last week. Davis believes he probably wouldn’t want it any other way. It’s his opportunity to mold and develop this group which he and his staff recruited.

“His personality is conducive to, ‘guess what folks we have graduated eight, nine on defense. It’s your opportunity. Let’s go play.’ I think it serves him and the program well. They will have a big say on who wins the Pac-12 South.”

Graham never envisioned it any other way.